BBC Radio 4 has produced an audio documentary called Podcasting – The First 10 Years. The documentary looks back at the first decade of the medium we all know and love (or hate, depending on the day). The documentary spans two parts for a total of about 60 minutes worth of audio. And (for now, at least) those episodes are available for on-demand streaming from the BBC website. But the documentary is nowhere to be found in any of the podcast directories, and the BBC site itself points to no way to subscribe to the series via RSS.

It seems like an odd choice, as this is something that would obviously appeal not only to podcasters but also to fans of podcasting in general. In fact, the BBC already has a large collection of podcasts and other downloadable media. But for some reason they decided not to podcast their documentary about podcasting.

For those who are curious about the documentary, it’s presented by Helen Zaltzman and Olly Mann, hosts of the Answer Me This! Podcast. The documentary finds the pair digging around the early days of podcasting. They seek out the guy who actually coined the portmanteau “podcast.” They also cover podcasting pioneers like Adam “The Podfather” Curry, and the rise of podcasting’s prominence after its introduction into Apple’s iTunes Store. From there, the documentary looks at other personalities who’ve made names for themselves in the space such as Marc Maron and Mignon Fogarty AKA Grammar Girl.

As a podcaster myself and a fan of the medium, I’d really like to listen to the documentary. Unfortunately, every time I’ve tried to listen to episode one tonight, I received this from the BBC website: 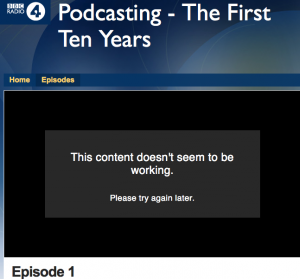 Hmmm. “This content doesn’t seem to be working.” Had this podcasting documentary actually been made available as a podcast, I could download it right now. And listen to it right now. Or I could listen to it later. Or tomorrow. Or next week. But alas, that’s not an option. I’m left to simply “try again later.”

Now all I have to do is remember to come back to the BBC website and click that play button. If only there were a better way to consume time-shifted media in 2014…

17 thoughts on “BBC Podcasting Documentary Not Available As A Podcast”