Streaming audio/podcast aggregation app Stitcher is expanding the reach of its Listen Later service. Stitcher originally launched Listen Later as an in-app feature in 2003. The idea was simple but effective: When users find something in Stitcher they’d like to listen to at a later time, they can tap a button next to the item of interest, and that item is then added to a queue for later playback. This new addition to the feature takes Listen Later outside of the confines of the app, and allows for Listen Later buttons to appear on the web. Now, users can find things to listen to while web browsing and instantly “save” these audio portions by sending them to that same Listen Later queue inside of Stitcher.

And while Stitcher aggregates over 20,000 different audio feeds, this new Listen Later service is being rolled out slowly. It’s currently only available to a handful of partners. But Stitcher is planning on expanding the scope of Listen Later over time, eventually allowing all of its “partner” shows (a term Stitcher uses for any podcast that’s distributed thru the platform) to take advantage of this service. 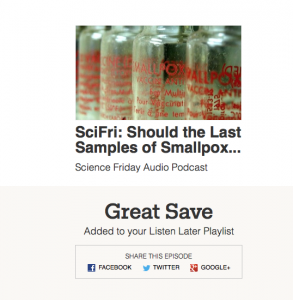 I then checked the Stitcher app on my iPad and the above episode was indeed added to my Listen Later queue.

This looks like a pretty cool new feature from Stitcher. I’m definitely looking forward to seeing it available on more websites in the future.