Stitcher announced today that when Android Auto rolls out they will be one of the first Android Auto’s developer partners. This will mean Stitcher will be available  in an even greater number of vehicles including Acura, Audi, Fiat, Kia and many more. 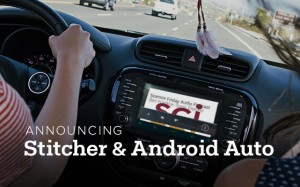 They are also built into the new Aether Cone (so apps are now coming built in to speakers).

Last week, Stitcher launched their Tweetcards integration to increase engagement with your audio on Twitter. Now, if you use a Stitcher share link in a Tweet, Twitter will automatically embed Stitcher’s player where anyone is able to listen to the episode you shared. Listening that happens on Twitter using the Tweetcard counts toward your Stitcher listening numbers and also includes great features like a “Share” button as well as the “Listen Later” function, allowing your audience to save the episode to their Listen Later playlist if they don’t have time to listen when they come across your episode