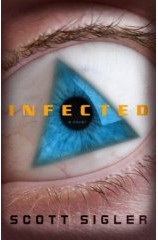 Science-fiction/horror author Scott Sigler, who made a name for himself in the early days of podcasting by releasing his novels as free podcasts, has had his story Infected optioned by a television production company. From Sigler’s blog:

“INFECTED has been optioned as a TV series by Timberman/Beverly, the company that produces JUSTIFIED, ELEMENTARY, MASTERS OF SEX and more.” “…I have sat down with Carl Beverly (who runs the company along with his partner Sarah Timberman), and he seems quite excited about bringing INFECTED to the small screen. Timberman/Beverly can also pick up options for CONTAGIOUS and PANDEMIC at any point, if they decide to use the characters and plotlines from either or both of those books.”

This is great news for Sigler and his fans. But having something optioned by a production company isn’t a guarantee it’ll actually get made. Regardless, it’s a real acknowledgement of Sigler’s work, not just as an author but also as an independent creator who made a name for himself by building an audience on his own.

According to Wikipedia, Sigler released the first-ever podcast-only novel, EarthCore in 2005. He followed that up with several more titles, including Infected. Sigler is also a Parsec Award-winning author, having taken the trophy in the Best Speculative Fiction Story category in 2008, 2009, 2010 and 2011.