Rick Calvert has announced the new dates for the New Media Expo  will be co-located with the NAB Show. It will be at the Las Vegas Convention Center the same location as the very first BlogWorld & New Media Expo back in 2007. Only now alongside the NAB Show the exhibits will take up the entire convention center and the Westgate Resort across the street.

NAB stands for National Association of Broadcasters. This is the annual trade show and conference where TV and radio broadcasters, film makers and marketers who create audio and video come to every year. It is the place where the latest technologies, tools and strategies are shared. Last year 93,000 electronic media professionals came to the NAB Show. 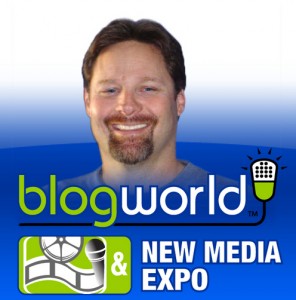 “I promise you if you join me at NMX and NAB Show next April 13 – 16 it will open your eyes to what the New Media Revolution can be. You will see what I have been dreaming about, some would say preaching about, and working tirelessly towards for the last eight years.

Web TV creators want to see the latest cameras, mics, video editing software, CDN networks, lighting, booms, tri-pods, cables and every other imaginable tool you can think of to make their content better when they come to NMX.

Bloggers want to network with potential partners and sponsors from the biggest media companies and brands in the world when they come to NMX.

You will find all of that and so much more when you come to NMX April 2015.

We will revolutionize the NAB Show and take The Media Revolution to an entirely new level.

I am more excited than I can possibly explain.”

This will be an interesting experiment to see. One would think that the podcasting gear that was almost non-existent at the last Expo should now at least make an experience. From what I hear, most of the gear at the NAB show would typically be out of reach of the typical podcaster budget. The good news is we shouldn’t have to worry about people getting snowed in in April.