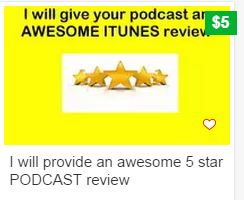 If you look on any sites like  Reddit or certain Facebook groups, or private forums there is a practice that is happening. Groups are agreeing to trade podcast reviews in iTunes (in many cases without listening to the show). Most feel because “everyone” is doing it, it must be ok. They are motivated by the ends (their podcast being in the new and noteworthy section of iTunes) justifying the means. Everyone wants to get pushed to the front of the line. Don’t get me wrong, who doesn’t? I just feel people may be missing the bigger picture.

In the long run, this is a bad idea. Please bare with me and let me share some history with you.

A Bit of History

I’m going to relate this to my musical background. There was a club in Cleveland, Ohio called Fat Fish Blue. When I formed a band, that was my target. That was my dream to some day be at THE Fat Fish Blue. We could’ve started knocking on the door the minute we had enough songs to play a full night, but we chose to wait. Much like your podcasting audience, you had one shot to impress Fat Fish Blue (and we didn’t want to waste it). Instead of sending in our demo we played small clubs, free fundraisers, and dives. We practiced a lot. On break we met with the audience and developed STRONG relationships so they would follow us to the next gig. Three years into the life of the band, we were like a well oiled machine. We made the cover of the entertainment section of the local newspaper (pretty cool). We opened for national touring bands. We submitted our demo to Fat Fish Blue, and they booked us – because we were good. I am SO GLAD that we didn’t submit the demo we made when we first started. We weren’t very good.

Do you know what? When you first start your podcast, it may have a lot of room for improvement. You may not have found your voice. You’re missing some polish. You are missing the icing. A cup cake without icing is a really bland muffin.

Think of all the American Idol winners. There may be three winners who have had extended careers. Why such a small number? Because they were pushed to the front of the line without the development that comes through time. They haven’t established that fan base through gig after gig. I haven’t heard much from the David Cook camp these days have you? When you artificially inflate your iTunes rankings you are doing the same thing. Your podcasting fame will be over before you can say “Taylor Hicks.”

Good marketing only allows people to find out you have a poor product faster.

There is a saying: Good marketing only allows people to find out you have a poor product faster. Getting into iTunes “New and Noteworthy” prematurely may be the worst thing that happens to you. People find you, they hear your inexperience. They hear the lack of confidence and organization. They hear the poor microphone choice. They hear the utter lack of originality and they tune out. Later when someone asks if they’ve ever heard your show they answer, “Yeah, it sucked.” Thanks to your “hustle” you’ve let more and more people know your show is not ready for prime time.

To this you say, “That’s OK Dave I’ll just change my shows name and resubmit again. I’ll buy enough reviews to push me back to the front of the line. Really? How about taking that effort and putting it into content that will IMPACT your audience? Create content that MOVES them to WANT to review you. Remember the old Smith Barney commercials (OK, of course you don’t) there was a phrase, “At Smith Barney we make money the old fashion way we earn it.” The best practice in the long run is to earn your podcast reviews.

Let’s look at Radio. I wasn’t around for the 50’s, but books and movies make it sound like the listeners were drawn to the personalities. Fast forward 65 years and you have no personality and for the most part less and less listeners (once you start listening to podcasts – you don’t go back). People would gather in their living rooms to listen. They had everyone’s attention. The Radio industry was mesmerized  by the connection that the DJ had with the audience. They were amazed at the emotions that musicians evoked in their fans (causing them to faint). They pushed more and more advertising into the airwaves watering down the product. What was wrong with a little more more advertising? “Everybody was doing it.” They focused on profit. It became less about the music, and much, much more about the business. Creativity was squelched, and musicians who don’t fit a certain mold never stood a chance of being heard. All in the name of money, Radio was put on life support with no doctors and no cures in site. As someone who lives in the home of the Rock and Roll Hall of Fame I can personally say the music stations are unlistenable.  If I have to hear “Two Tickets to Paradise” one more time I will seriously consider ending my own life. The platform has lost a large chunk of its power.

What does this have to do with New and Noteworthy? Because when you join a forum and everyone agrees to write glowing reviews of each others podcasts it is false advertising. The people who use New and Noteworthy to find good shows, will find it less useful. Instead of finding engaging content they find (as Steve Jobs put it) “Amateur Hour.” New and Noteworthy will lose it’s integrity (and as podcasters we all know – all we have is our integrity).

Back around 2007 when PodcastAlley.com was THE place to get ranked. A very high profile Internet marketer used his giant email list to send him from zero to the #1 spot overnight. The podcast community thought, “Who is THIS guy?” We had never heard of him. I tuned in. The podcast was horrible. It was all about HIM and how awesome he was. There was zero value. It was awful. It was so obvious this person was clueless about his audience. The next week he fell completely off the chart – never to be seen again. Just to be clear he went from the number one position to completely off the charts. If  he had waited and figured out what his audience needed, and made a good show, he may have been the talk of the town. Instead he fell off the podcasting planet. When you spend money, promise reciprocal reviews, or whatever you’re using for compensation for reviews in iTunes you are doing yourself, and podcasting a disservice. Just because “everybody’s doing it,” does not make it OK.

So you bribe your way on to new and noteworthy. That exposure lasts for two months. Now what? In the end it’s your content that keeps people coming back. Yes podcast promotion gets people to your website, but its your engaging, impacting, entertaining, and valuable content that keeps them coming back. Is your plan to work the kinks out in front of your now larger audience?

So I Should Never Ask For A Review in iTunes?

No, not at all (and if that’s what you’re thinking you need to go read this again). Let your audience review you because they are inspired (not some stranger who you are trading reviews with or paying a fee).  Earn your reviews.

While you may think that what you’re doing is best for YOU (and in the SHORT term it is), in the long term you get more people finding that your podcast is half baked. Finding a good podcast becomes synonymous with “finding a needle in a haystack” and new and noteworthy becomes a joke (some might say it already is).

As podcasters we need to think outside of our shows, and make sure that podcasting as a whole provides value to the audience. Without our audience – we have nothing.

Leave your comments below.