Summer is fast approaching and it’s apparently become the season of podcast awards. Two different podcast awards competitions, the Peoples Choice Podcast Awards and the Academy of Podcasters Awards, both recently announced the nominees for their respective award categories. While there may be some minor overlap between the two awards systems, they both work differently and completely independent of each other.

The Peoples Choice Podcast Awards is now in its 11th round. Commonly referred to as just “the Podcast Awards,” nominees for this awards system are determined by online voting, followed by a vetting and qualification period. Then, podcasts are chosen to compete in the following categories:

Just like the nomination process, the Peoples Choice Podcast Awards winners are determined via online voting, which officially open Sunday, May 29th. 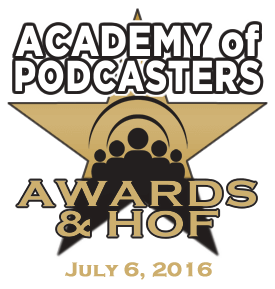 The Academy of Podcasters Awards operate in a closed-ballot system. Finalists are chosen by the Academy, and only members of the Academy are allowed to vote for shows in these categories:

Academy of Podcasters Awards winners will be announced during a ceremony on Wednesday, July 6th in conjunction with the Podcast Movement conference.