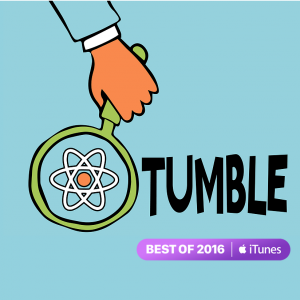 Tumble is a science podcast that is for kids. It has been named to iTunes’ list of the best podcasts in 2016. This is the first year that a podcast for kids has made the list.

Tumble explores the stories behind science discovery, starting with kids’ own questions. Often called “Radiolab for kids” by reviewers and listeners, the podcast inspires children to get curious and instill a love of science through storytelling.

The show is hosted by Lindsay Patterson and Marshall Escamilla, a married team of a science journalist and a middle school music teacher. Sara Robberson Lentz, a science writer, is the associate producer of Tumble. The show is targeted for kids ages 6-12, but is made for all ages to learn something new in each show.

The idea for Tumble came after the birth of the hosts’ son in 2014. This was around the time when Serial was immensely popular. Lindsay Patterson got her start as a producer in science radio, and she recognized that there was a lack of audio content made specifically for children.

Tumble was developed with two goals in mind. First, to explain to kids how science works through stories of scientists. Second, to encourage more podcasts for kids. The iTunes recognition of Tumble as “Best of 2016” marks an important milestone for kids podcasts, and promises a bright future ahead.