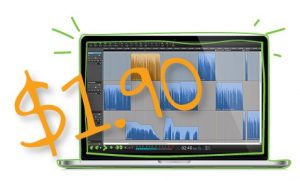 Most podcasters key in on one digital audio workstation and then use it, sometimes forever, unless they feel a specific need to try something different. (I’ve operated this way myself for over a decade now.) There can be some sizable roadblocks to adopting a new DAW, with getting over the learning curve and the potential expense of a new software package being the largest. But once in a while, a deal happens that’s so good, you can’t pass it up.

In honor of World Radio Day, the makers of Hindenburg Journalist, a full-featured digital audio production application, are selling the DAW for just $1.90:

At Hindenburg we always celebrate World Radio Day by collaborating with other organisations and offering radio producers discounts.

In 2017 the theme of WRD is “Radio is You”. A particular focus area is improving the collaboration between radio stations and the surrounding Civil Society, Non-Government Organisations and Educators.

As this is an area Hindenburg is particularly engaged in, we are teaming up with Cultural Survival to promote their mission to advance Indigenous Peoples’ rights & cultures worldwide.

This means that a family must earn at least $1.90 a day to meet its most basic food, clothing and shelter needs. A family earning less is generally accepted to be living in extreme poverty.

It is estimated that half of the world’s population, about 3 billion people, live in poverty. Of that, at least 700 million people live in extreme poverty, earning less than $1.90 per day per family.

A large number of these families are Indigenous Peoples, who are furthermore often discriminated against and denied equal access to education, media and services in their home countries.

For the whole of World Radio Day around the world, from 00:01 in Kiribati on the Christmas Islands, to 23:59 in Honolulu, Hawaii, Hindenburg will proudly offer a full Journalist licence for $1.90*. We will match all income from those licences sales and donate all proceeds to Cultural Survival.

As per tradition there will also be big World Radio Day discounts on Upgrade Journalist to PRO and Journalist PRO.

Even if you’re happy with your current DAW, I strongly recommend that you pick up a copy of Hindenburg Journalist at this deeply discounted rate. Who knows? You may find out you really like it!