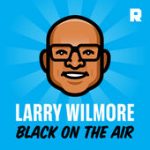 Now, Larry Wilmore has a podcast. It is called Larry Wilmore: Black on the Air.  The podcast is part of The Ringer Podcast Network (which is operated as part of the Bill Simmons Media Group).

Emmy Award – winning producer, actor, and comedian Larry Wilmore is back on the air, hosting a podcast where he weighs in on the issues of the week and interviews guests in the worlds of politics, entertainment, culture, sports, and beyond.

A teaser of Larry Wilmore: Black on the Air was released on May 9, 2017. The first official episode, which features Norman Lear, was released on May 11, 2017. Normal Lear was the creator of “All in the Family”, “Good Times”, “The Jeffersons”, and many other groundbreaking series. Future guests include Bernie Sanders and Neil deGrasse Tyson.