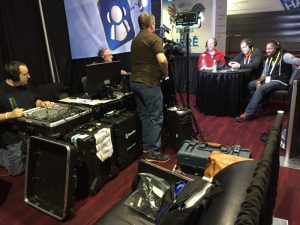 This year the TPN team made up of shows you love and trust will have their broadcast studio at the Sands Expo Hall. The team’s blog post says what we have found is the startups and vendors at the Sands are more aligned with what our teams and audience have come to expect from us. CES has grown so massive they say that it is impossible with the number of folks they will have on the ground to cover it all. The TPN team will be broadcasting from the lower level of Sands Exposition center the full four days of the show to their knowledge, they will be the only group that will have a dedicated broadcast studio in that hall.

This means a big change for the vendors that are accustomed to seeing the TPN team in the North Hall at LVCC. This opens up a huge opportunity for all the startups that found it hard to come see the team in the past at LVCC. This will also give TPN ready access to the Sands second-floor vendors who are introducing innovative products on their own.

New this year will be a roving live team that will transmit back to the broadcast studio allowing them to broadcast directly from the vendor’s booths. Broadcast appearance applications are open on the team’s coverage page at TPN.tv.