Podcasters need to be aware that what they say on a podcast could, potentially, cause them to lose their job. Such is the case with a teacher in Florida who was removed from the classroom after a HuffPost article revealed that she was host of what several news sites are describing as a “white nationalist” podcast.

Dayanna Volitch was a social studies teacher at Crystal River Middle School in Florida. At the same time, she was hosting a white nationalist podcast and using the pseudonym “Tiana Dalichov”.

The podcast is called Unapologetic with Tiana Dalichov. When I searched for it on Apple Podcast, I got a little pop-up that said “The item you’ve requested is not currently available in the U.S. store”. It no longer appears on Stitcher or Soundcloud.

Some of the episodes are, at the time I am writing this post, still available. Interestingly, the top of the TuneIn page includes a link to a website called Remso Republic, which brings up a 404 when I tried to search for Unapologetic with Tiana Dalichov. The Twitter account connected to the podcast no longer exists.

HuffPost reported that in the podcast “Tiana Dalichov” and a guest “railed against diversity in schools” and argued that science had proven that certain races are smarter than others. She also agreed with her guest’s assertion that more white supremacists need to infiltrate schools and become teachers.

HuffPost reported that the teacher “boasted about bringing her white nationalist beliefs into the classroom and hiding her ideology from administrators. She said when parents complained to the school’s principal about how she is injecting political bias into the classroom, Volitch lied to the principal and said it was not true.” 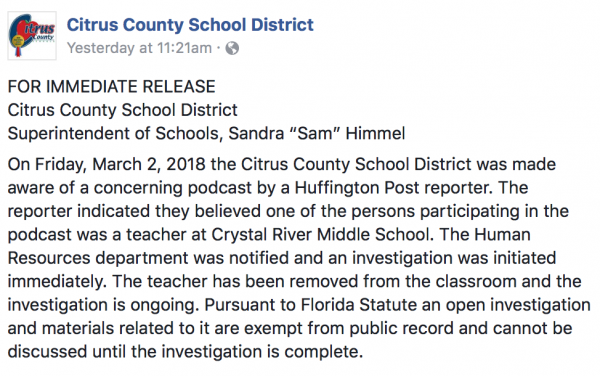 The main thing that podcasters should take from this example is that one cannot truly be anonymous, forever, on the internet. HuffPost discovered that teacher Dayanna Volitch was “Tiana Dalichov” after finding a writing website that promoted the writing of the pseudonym.

The bio on that website include the age, city, and photo of Dayanna Volitch. HuffPost compared that photo to the photo of the teacher on the school’s website. In addition, “Tiana Dalichov” mentioned on the podcast that she was a teacher.