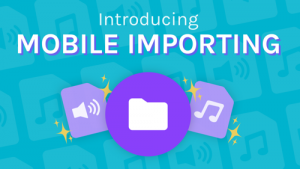 Anchor announced that you can now build podcast episodes in Anchor using audio from any app on your phone. This new feature is called Mobile Importing.

Anchor says that one of the biggest feature requests they get from podcasters is that they want to be able to manage their episodes entirely on the go, without being tethered to their computer for things like uploading.

The new Mobile Importing feature provides what podcasts have been asking Anchor for.

To pull in audio from other apps, just tap the “Import” button in your Library and browse files stored on your device or in the cloud (iCloud Drive, Dropbox, Google Drive, etc.) You can also share audio files to Anchor from any app on your phone!

Anchor has some suggestions on how to use this feature:

In addition, Anchor users can now access all of their historical Anchor content in one convenient place: The Library tool. Easily re-use the same intro for multiple podcast episodes, pull in the interview you captured on the go last week, or do a callback to a hilarious moment from a previous episode.