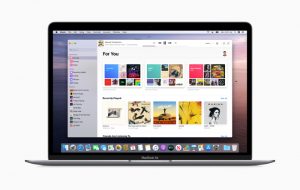 Based on the information Apple posted in its Newsroom, there doesn’t appear to be any changes happening to the Apple Podcasts app. This isn’t very surprising, because Apple Podcasts was launched in 2017 and appears to be quite popular.

Apple launched the iTunes Music Store in 2003, and it has gone through many changes since then. When macOS Catalina launches, iTunes will be split into three separate apps. Apple is replacing iTunes with a new Music app for Mac.

According to Apple, “Users will have access to their entire music library, whether they downloaded the songs, purchased them or ripped them from a CD. For those who like to own their music, the iTunes Music Store is just a click away.”

What does this all mean for podcasters? It sounds like you won’t have to make any changes to your podcast if it is currently on Apple Podcasts. You will still be subscribed to whatever podcasts you already are via Apple Podcasts.

I recommend that podcasters go through their iTunes library before they update to macOS Catalina. Your music will find its way to the Music app for Mac. I’m not certain that podcast episodes, that you downloaded outside of Apple Podcasts, and then put into iTunes, will also migrate.