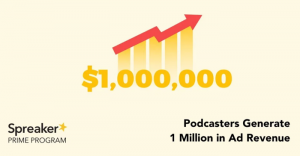 Spreaker announced the initial success of Spreaker Prime, their new white-glove service for talented independent podcasters and networks. In the first three months of the revenue-sharing program, Spreaker’s Spreaker Prime podcasters generated $1 million via programmatic advertising, with sixty-percent of the profits going directly to the podcasters.

Earlier this year, we decided to put more of an emphasis on helping the promising podcasters on our platform by connecting them to more monetization opportunities. With this goal in mind, we dreamt up Spreaker Prime, a program that supports the growth of independent podcasters and publishers by helping them increase exposure, streamline publishing and maximize ad revenue.

The advertising technology that Spreaker uses was created by Voxnest (Spreaker’s parent company).