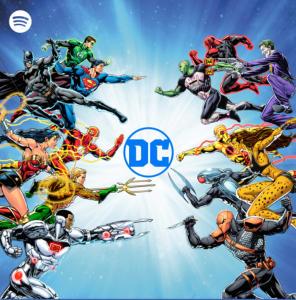 Spotify announced that Warner Bros. is bringing the DC Super Heroes and Super Villains to Spotify as an exclusive series of podcasts. Spotify has entered a multiyear partnership with Warner Bros. and DC to produce and distribute an original slate of narrative scripted podcasts exclusively on Spotify.

The partnership—the first to involve the intellectual property of the entire DC Universe —will leverage iconic characters in new Spotify shows. Additionally, the companies are expected to draw upon Warner Bros. Studio’s broader collection of timeless titles as stand-alone podcast series. This collaborative and innovative effort will further increase the diverse array of premium storytelling content for Spotify listeners around the world.

Spotify says that Warner Bros. Digital Networks (WBDN) will manage the business and strategy related to the partnership. Television Group’s digital studio, Blue Ribbon Content (BRC) will oversee the creative relationship and will co-develop and produce the programming in collaboration with Spotify. Spotify itself will be responsible for the marketing, advertising, and distribution of the shows exclusively on the platform.

Variety reported that this deal gives Spotify first-look rights to original scripted narrative DC podcasts based on its stable of Super Heroes and Super Villains. The shows will have new storylines that are set in the DC Universe, unrelated to existing movies or TV shows.

In addition, according to Variety, Warner Bros. will develop original scripted podcast series based on some of their other properties, such as Looney Tunes and Warner Bros. TV-produced shows like “Supernatural” – as well as original podcasts unrelated to Warner Bros. existing intellectual property.