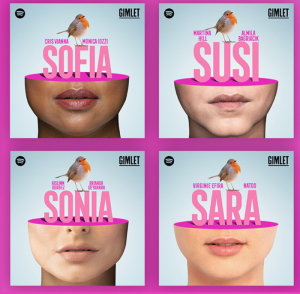 In 2018, Gimlet Media launched Sandra, a seven-part fictional drama depicting a world where artificial intelligence isn’t so artificial. Since then, Gimlet Media has become part of Spotify.

Sandra had big names and voices including Alia Shawkat (Helen), Kristin Wiig (Sandra), and Ethan Hawke (Dustin). The podcast launched to critical acclaim due to its relevant themes of technology, security, and self-actualization. Spotify deemed it a story worth telling listeners around the world.

On July 7, Spotify and Gimlet premiered an exclusive Sandra podcast in four markets: France, Germany, Brazil and Mexico. The most interesting about this release is that it is not just a translation into the local language. Instead, each version is specially adapted via a culturally relevant name, a customized storyline, and more.

Sandra will be called Sara in France, Susi in Germany, Sonia in Mexico, and Sofia in Brazil. Sandra is the first truly localized adaptations ever made of a hit fictional podcast.

The Spotify Studio teams in those four countries have worked with local directors to adapt the script, cast local talent, and reimagine the podcast with an appreciation for local culture, language and nuance. In each market, the podcast has an A-list cast mixed with traditional TV and film actors as well as digital creators and influencers.

I think this is a fantastic idea! Adapting the podcast to a localized population would make the show easier to relate to and get involved in. Spotify has the ability to have separate teams to work on each adaptation – and the money to hire the voice actors. That’s way beyond the ability (and finances) of most podcasters. So, it is good to see Spotify making use of their resources in this unique way.