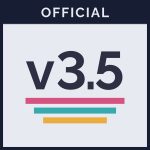 Squadcast announced that its Video + Audio Recording is officially out of beta. Nearly 1 year of HD-quality videos have been recorded in less than 1 month.

Squadcast’s v3 launched in beta at the end of January and has already been very well-utilized by SquadCasters. At the end of February of 2021, SquadCast officially took the beta tag off of the new version! With the help of thousands of their customers, they were able to add valuable features and fix a lot of issues, listed below. They are excited for SquadCasters to continue creating and exploring v3’s video and higher quality audio capabilities.