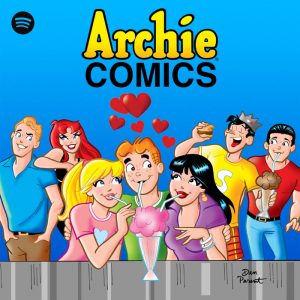 Archie Comics and Spotify have signed an exclusive first-look deal to adapt the publisher’s critically acclaimed and bestselling characters and stories into multiple podcasts on the streaming platform.

The anticipated slate of series will span the entire Archieverse of characters, including mainstays Archie, Betty, Veronica, Jughead, Sabrina, Josie & the Pussycats and many more and is the next part of Archie’s continued effort to expand to new audiences and story-telling mediums with its wide array of world famous characters.

“The podcast and studio space is so vibrant, and Spotify is, hands down, the industry leader there,” said Archie Comics CEO/Publisher Jon Goldwater. “Bringing the iconic Archie library of characters to Spotify is a perfect match, and we’re so excited to partner with them to explore new, compelling stories featuring our characters. It’s an amazing frontier and we can’t wait to unveil what we’ve been working on.”

The creative team at Archie Comics will collaborate with Spotify Studios on the development of multiple series, with potential for all-ages content as well as content aimed at older audiences.

Archie Comics continues to expand its multimedia offerings as the brand’s digital and print partnerships include deals with Scholastic, Comixology and Little Bee Books. It’s television deals include partnerships with Warner Brothers Television, which has produced worldwide hits including the CW’s Riverdale, Katy Keene, and Netflix’s Chilling Adventures of Sabrina.