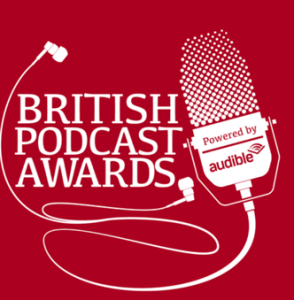 The British Podcast Awards were established in 2017 by co-founders Matt Deegan and Matt Hill, later taking on the Australian Podcast Awards in 2019 and the Irish Podcasts Award this year. In 2021, they partnered with Radiodays Europe to create the worldwide event: Podcast Day 24, which brings together creators, advertisers and platforms from all across the world to share ideas, knowledge and best practice.

Speaking about the partnership, Matt Deegan, co-founder of Podcast Awards Ltd., said: Having run the Awards since 2017, it was important to find the right partner that empowered us to continue to cater to podcast creators big and small and promote all the great work they do. We have definitely found that with Haymarket. Its global presence allows us to accelerate growth, be more ambitious and get creative with opportunities that until now have been out of reach.

Co-founder, Matt Hill added: Working with the Haymarket team oers a wealth of access and opportunities for the sector – whether you’re making your shows at weekends or as your day job, this new partnership is going to have a positive impact on what you make. We can now be more adventurous with our plans to suit all podcasters, better reflect the needs of the sector and have security for the future.

Kevin Costello, Chief Executive at Haymarket commented: This investment reinforces our position in the rapidly growing audio space. We have seen the success of our own audio brands, including the Campaign Podcast, PRWeek Podcast, Third Sector Podcast, Rheum Advisor on Air and GP Online Podcast, and with our expertise in the awards space, the addition of the Podcast Awards makes for a perfect fit. The two founders have produced a brilliant product and we look forward to working together to further develop the brand globally. We already have plans to launch a Podcast360 event as part of our Media360 annual suite of conferences, strengthening our commitment to serving a remarkable content to our roster of international clients and audiences.

British Podcast Awards announced the 2021 winners. The winners were chosen by over 100 international and UK judges working in the sectors.

The Gold Award: Answer Me This! – Helen Zaltzman and Olly Mann

Acast Moment of the Year: Where Is George Gibney? (BBC Sounds) – Mark Hogan

Best Daily Podcast supported by Spotify: The Intelligence (The Economist)

Find out more about additional winners of the British Podcast Awards 2021 on their website.

The winners of the 2021 British Podcast Awards will be announced on July 10, 2021, at 2pm, with hosts Poppy Jay (Brown Girls Do It Too), Jordan North, and William Hanson (Help I Sexted My Boss).

Some of the categories include:

Doing It For The Kids
How To Own the Room
Money Maze Podcast
The Diary of a CEO
The Voiceover Social
We Built This City: Greater Manchester

Anthems
Stories of Our Times
The Intelligence
The Santa Daily
Today in Focus
Wake Up, Wind Down

Cassie and Corey
DEM TIMES Lem N Ginge: The Princess of Kakos
Once Upon A Time in Zombieville
The Harrowing
This Thing of Darkness

There are several different categories. Each one has six nominees. Visit the British Podcast Awards website to see the full list of nominees, and to click on the links to podcasts on that list that you want to know more about.

Voting for the Listener’s Choice Award (supported by BBC Sounds) is now open. It is the only award chosen by the general public, and saw over 190,000 votes cast last year. Voting closes midday on Monday 6th July. To vote for your favorite podcast, visit britishpodcastawards.com/vote

Busy Being Black a podcast exploring how it is to live in the fullness of queer black lives. It will produce six episodes titled “Queer Black Lives Matter”.

Why Aren’t You A Doctor Yet? is a podcast where science and tech journalism meets pop culture. Delivering a mini series titled “An A-Z guide to sickness and health in ethnic minorities”.

Quirky Voices Podcast is a podcast that hosts a variety of stories for adults and kids in audio fiction format. It will deliver a project titled “Anyone F’Coffee” about five women who know each other well, all living with hidden pain.

STEM in the Gorbals is a podcast about people’s experiences of mental health in Gorbals, recorded and edited by young people. They will deliver four podcasts which support young people and children to use technology to explore mental health and will be taking a medical view on lived experiences.

Getting Better Acquainted is a podcast about people, relationships, ideas, feelings, documenting moments and changing and developing as humans. It will produce a mini series titled “Down to a Sunless Sea: Memories of my Dad” about the host’s relationship with his dad.

Stranger Minds is a chat show about breakups and how we recover from them, hosted by the award winning comedian, author, and speaker, Rosie Wilby. She will deliver two feature length live episodes featuring a panel in consultation with science adviser Dr. Qazi Rahman.

The Breakup Monologues is a chat show podcast about breakups and how we recover from them, hosted by the award winning comedian, author and speaker Rosie Wilby. She will deliver two feature length live episodes featuring a panel programmed in consultation with science adviser, Dr. Qazi Rahman.

Declassified documents stories from the military community to help, support, and guide those suffering from mental health and physical illness and injury. They will produce at least five episodes titled “Declassified – Mental health tool kit”.

Probably True is a podcast about stories of queer life and even quee-er sex. They will deliver three episodes looking at LGBTQ storytelling, exploring the impact of HIV on the LGBTQ community in the UK during the 80s and 90s, and comparing with recent research showing a decrease in the number of new infections.

Discovering Dementia is hosted by Penny Bell. The podcast is about the journey following her mum’s diagnosis of Alzheimer’s and vascular dementia, and how shocked she was when finding out how little organized provision there was for those facing this devastating diagnosis in the UK.

A Gay and a NonGay is hosted by James Barr and Dan Hudson. It is the UK’s biggest LGBTQ+ podcast. They will produce a multi-part series titled “AIDS: Current Treatment and Future Cures”.

The British Podcast Awards have launched an initiative that offers financial support to podcasters to enhance their shows. It is called the BPA fund. Launching the fund is a £50,000 partnership with Wellcome to create an exciting new opportunity for podcasters and their listeners to champion conversations around how science affects our health, called The Pulse Award.

Co-founder Matt Hill said, “this award is a great opportunity for podcasts of all shapes and sizes to elevate their use of the latest scientific research. And the best thing is we’re not limiting this to factual or science podcasts – we welcome entries from all genres, from fiction to true crime.”

The Pulse Award will award podcasts with grants of up to £50,000 to make health-focused features, episodes, and short series that engages listeners in science and health research.

Imran Khan continued, “When we launched Wellcome Global Monitor earlier this year, we found that people who feel like they benefit from science are seven times more likely to trust science than those who don’t feel that way. The Pulse Award will help us to address this gap by bringing more, and more diverse, people to the conversation about science and health.”

You can find a link to, and a logo of, all of the winning podcasts on the British Podcast Awards website. Many categories named a Gold, a Silver, and a Bronze winner. I’m including the Gold winners from each category here.

Family – Gold: Once Upon a Time In Zombieville –Bigmouth Audio [for BBC Radio Scotland]

International Award – Gold: Where Should We Begin? With Esther Perel – Audible 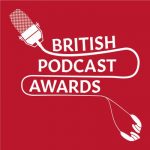 The winners of the 2017 British Podcast awards have been announced. The winners were chosen by over fifty independent judges working in podcasting. The British Podcast Awards website has the full list (with links to the winning podcasts.)

‘Other’ (AKA Most Original Podcast): 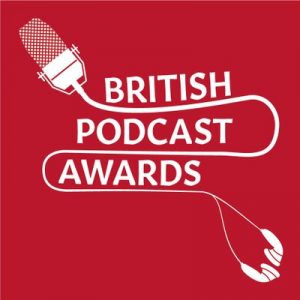 The British Podcast Awards was created to highlight the best podcasts of the year that were made in Great Britain. The deadline for entering your podcast is March 6, 2017.

The British Podcast Awards hold a competition to showcase the best podcasts of the year. They welcome all podcast makers to enter: from big brands to bedroom publishers, charities to comedians, anyone who is helping to build an industry in which we can all be proud.

It is the only British podcast-only competition decided by independent judges. Nominees will have their shows featured on theguardian.com, as part of an exclusive podcast series showcasing all the categories.  It costs £15 per entry (plus PayPal fees).

To enter, your podcast must have been made in Great Britain and Northern Ireland. You must have created at least six episodes of a single podcast between January 2016 and December 2016. The deadline for entry is Monday, March 6, 2017. Entries should be in English. Audio must have been available to download via RSS within qualifying period.

You have to enter (up to) 4 clips – as a single MP3, up to a maximum of 15 minutes – that best describes the work that you do. You can also submit background information and/or tracklisting.