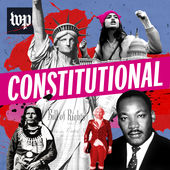 With the writing of the Constitution in 1787, the framers set out a young nation’s highest ideals. And ever since, we’ve been fighting over it – what is in it and what was left out. At the heart of these arguments is the story of America.

Constitutional is a follow-up to the popular Presidential podcast (which is also from The Washington Post.) Lillian Cunningham a Washington Post reporter, is the host of both podcasts. In this new series, she explores “the Constitution and the people who framed and reframed it – revolutionaries, abolitionists, suffragists, teetotalers, protesters, justices, presidents – in the ongoing struggle to form a more perfect union across a vast and diverse land.”

At the time I am writing this blog, Constitutional has an introductory episode called “The Preamble”, a short episode titled “We the people” and three full episodes. Episode 1 is titled: “Framers” and is about the framers of the Constitution.

Episode 2 is called “Ancestry”. It is about a case that came before a Nebraska courtroom in 1879, that asked the question “Are Native Americans considered human beings under the U.S. Constitution?” The third, and most recent episode, is titled “Nationality”. It asks the question “What makes someone American” The episode focuses on a landmark Supreme Court case in 1898 that involved a child born in San Francisco to Chinese immigrant parents.