There Be Monsters, which is produced by Beau Flynn of FlynnPicture Co., Dan Bush of Psychopia Pictures and John Boyega of UpperRoom Production, will be available later this year on the iHeartPodcast Network.

In this new scripted thriller, Boyega plays Jack Locke, the mysterious hero with a vendetta who infiltrates a Silicon Valley body-hacking startup run by an cinematic CEO Max Fuller, played by Criss, whose highly secretive creations promise to enhance human biology in incredible ways – but every drug has a side effect.

iHeartRadio, FlynnPictureCo., Psychopia Pictures and UpperRoom Productions began developing There Be Monsters in November 2019 as part of an expanding slate of immersive “PodFiction” (PodFi) audio dramas. As the creative team was getting ready to fly to London, Atlanta and LA to record the actors in early 2020, the pandemic hit and they were shut down.

Despite the challenges of executing a scripted fictional podcast thriller with a full cast of actors remotely, the creative team was eager to move forward and broke new ground in podcast production in June 2020. The podcast creators and the iHeart team created a completely remote technological process and each cast member was sent a “Studio in a Box,” which included important materials from a professional studio microphone to tutorial videos. These materials enabled the cast to record studio quality “scripted” audio from the safety of their own homes, while still performing together as they connected virtually via teleconference across multiple continents and time zones.

The director, producers and actors would connect virtually daily for six hours to record – and over the course of two weeks the production captured over four hundred pages of material with twenty different actors.

There Be Monsters production just wrapped and is now in post production. The PodFiction series will be distributed by the iHeartPodcast Network which is home to more than 750 original podcasts with over 215 million downloads each month. iHeartRadio Original Podcasts span every category from business, sports, spirituality and technology to entertainment, family, comedy and true crime – and everything in between – making iHeartRadio the largest publisher of podcast content in the world.

Tongal and iHeartRadio are on the hunt for The Next Great Podcast, and they want to pump your show into earbuds all across the globe! Submit your pitch for a chance to develop and launch a show on The iHeartPodcast Network, funded by iHeartRadio. Submissions are due by noon PT on August 27, 2020.

Here are some of the details you should know before you submit a podcast:

There is a Submit button on The Next Great Podcast website for podcasters to click on for more information.

Here is what else you need to know:

There is a section of the information that was posted in all caps and in red. It says:

“By submitting a podcast entry, your submission immediately becomes the sole property of Tongal or its assignees – see official rules for more details about ownership of entries. You may not publicly share or publish your submission in any manner and you may not post or upload your submission to any website or video hosting site (including, but not limited to, Facebook, YouTube or Vimeo), without the prior express written consent of Tongal. Failure to comply with this requirement may result in disqualification of your entry in the project.” 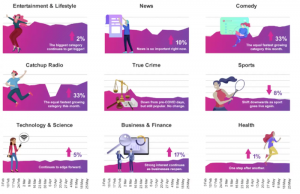 As part of its growth strategy, the iHeartPodcast Network has added new titles from Kast Media including: On Purpose with Jay Shetty, The Fighter & The Kid, and Impaulsive with Logan Paul. New titles from Audioboom include: Casefile, No Such Thing as a Fish, The Totally Football Show, and F1: Beyond The Grid.

These highly popular podcasts increase the content diversity across the Entertainment, True Crime and Sport categories for the iHeartPodcast Network Australia and provide enhanced commercial opportunities for clients to align and integrate within.

Stuart Last, CEO of Audioboom said, “Our podcasts feature well-known personalities and top talent from across the world, attracting global audiences, including significant numbers in Australia. The experience of ARN’s iHeartPodcast Network in monetising audiences makes them the perfect fit to further expand our advertising potential across the Audioboom roster. From the entertaining No Such Thing As A Fish to the true crime grit of the Australian-made Casefile, we know clients across Australia are going to love speaking to these new listeners.”

On the two new partnerships, ARN’s Head of Commercial Audio & Podcasts Corey Layton said, “ARN continues to dominate the podcast space, and these new partnerships with Audioboom and Kast Media will further extend and diversify our offering, giving brands access to some of the world’s most compelling and popular content.”

The announcement comes as ARN releases new podcast listener data for May with leading podcast technology provider Megaphone. Again showing growth month on month, the data captured for May shows strong audience growth with an increase of 6% compared to April. Overall, listening on the iHeartPodcast Network from when the pandemic was declared (mid-March to May) is up 22% compared to listening pre-pandemic (January to mid-March 2020).

iHeartMedia launched it’s first iHeartPodcast Channel. It is the new format on WSAN in the Allentown-Bethlehem, Pennsylvania, market. Since 2016, AM 1470 had been airing the Spanish-language sports network ESPN Deportes.

InsiderRadio reported that channel is now being called “The iHeartPodcast Channel on AM 1470”.

The iHeartPodcast Channel is a carefully curated experience that brings you the most creative stories from over 25,000 podcasts available on our free iHeartRadio app. From true crime to history, comedy to food, we’ll cover dozens of topics every week,” says Craig Stevens, SVP of programming for iHeartMedia in the Allentown-Bethlehem market.

The Morning Call reported that the 1470 frequency will continue to broadcast Lehigh Phantoms hockey, but will no longer carry the Philadelphia Phillies games in Spanish. The station will continue to air Tempo Italiano with John Richetta 8 a.m. to noon on Sundays.

The Monday-Friday lineup will be:

Jake Brennan, host and producer of the rock and roll true crime podcast Disgraceland, and iHeartMedia, the number 1 commercial podcast publisher globally, with over 20,000 podcasts on its platform, announced at the Winter Podcast Upfront a new partnership to bring listeners two additional seasons of Disgraceland to the iHeartPodcast Network.

Disgraceland is a true-crime podcast about musicians getting away with murder and behaving very badly. It is hosted and produced by Jake Brennan. It has thirty minute episodes that trace the most insane criminal stories surrounding our most interesting and infamous pop stars.

Season 3 will feature 10 episodes and will debut everywhere on March 14, 2019, with part one of a two-part episode on Kurt Cobain and Courtney Love. Part two will follow on March 19, 2019.

Subsequent new episodes will be released bi-weekly on Tuesdays beginning March 26, 2019, with an episode on Snoop Dogg. In addition, Disgraceland will debut the Season 3 premier first on iHeartMedia broadcast radio stations across the U.S. on March 13, 2019, before its available digitally on March 14, 2019.

“I can’t wait for Disgraceland listeners to hear Season 3,” said Host and Creator Jake Brennan. “They can expect more of the same highly entertaining stories from the seedy underbelly of rock and roll past and present, but with a whole new cast of characters: Kurt and Courtney, Ike and Tina, Johnny Cash and Amy Winehouse to name a few. More death, self-destruction, scandal, amazing music and pre-set mellotron loops.”

The partnership will also include a new slate of iHeartRadio Original podcasts led by Brennan set to be released later this year.

Two of the originals include Rocka Rolla, a serialized version of Disgraceland with a 10-episode arc on the madness and genius of Phil Spector, and The 27 Club, a new anthology series that will explore the lives of rock stars who died mysteriously at the age of 27. The new slate of shows will be hosted by Brennan and co-produced by iHeart Radio in the style of Disgraceland.