Join your fellow women podcasters for a weekend of learning, camaraderie, and belonging as you learn the core skills and aspects you need for every stage of podcasting. You’ll hear from women who have been successful podcasting ON THEIR OWN TERMS, who have done things THEIR way and will teach you how to do the same.

She Podcasts is a network of over 12K podcasters that identify as women and may or may not be career podcasters, or “corpcasters”. She Podcasts wants to host this first event to provide a space “for all of us side-hustling podcasters navigating our work in a male-dominated industry.”

Any gender identity and/or expression is valued and this event is targeting those that don’t fit the dominant avatar of podcast hosts, aka men. She Podcasts will provide a safe space for non-binary podcasters, cisgender women as well as trans women to thrive in a safe space.

They are planning on having three to four separate tracks for women in all different parts of the podcasting journey. Those tracks are called Start, Refine, Grow, and Accomplish. Each track will include sessions that speak to the skills for each phase as well as the mindset and energy that needs to be present in order for that phase to be conquered. 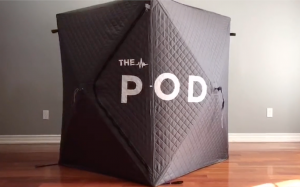 Does the ambient noise in your home cause problems when you want to record your podcast? Perhaps the Pod Mini is something that can help with that. It is a pop-up soundbooth that can be placed over you and your equipment while you record. PodMini is on Kickstarter. At the time I am writing this post, it has 10 days to go.

The Pod Mini was designed to be a pop-up soundbooth, for shared work areas or travel requirements podcasters often run into, such as podcasting on-site during events.

While the Pod Mini isn’t 100% sound proof from exterior noise (this is physically impossible in a portable unit), the quilted interior fabric in the walls dampen exterior sounds and echo from inside.

The Pod Mini is large enough for a small desk and stool. Or, you can put Pod Mini over the top of you sitting on the ground. There is no floor in the Pod Mini, so it’s easy to pop over and start recording. The size is 120cm x 120cm x140cm. There are ventilation windows on top to ensure air flow for the podcaster’s comfort.

The Pod Mini might be a good option for podcasters who are currently attempting to turn a closet into a tiny recording studio. It also could be useful for podcasters who need to record on location at conferences or other important events.

Southgate Media Group started with a vision: to make podcasts that are interesting, entertaining, and informative. They have a Kickstarter for a book called Podlife. At the time I am writing this, the Kickstarter has 10 days to go.

The Southgates are a family of podcasters. Rob and Martha are parents of Molly, who is a 10-year-old who has done over 300 podcast episodes and live shows. Southgate Media Group is a network of roughly 100 podcasts, blogs, and video channels.

Podlive is a collection of essays by 30 different podcasters from varied backgrounds and at different experience levels. This is not a mere “how to start a podcast” manual, this is a book about the human experience peppered with practical advice. What we have gathered is a series of essays about the lives of people that make and love podcasts.

The Kickstarter has a list of the names of all the podcasters who contributed to the book. There is an implication that more names will be announced. All three members of the Southgate family contributed an essay. While I don’t happen to recognize any of the other names on the list, my best guess is that people who listen to Southgate Media Group podcasts might recognize some of them.

Under the Risks and Challenges section of the Kickstarter, it says: “No risks here. The book will publish no matter what. Having the funds will simply make the launch better. Every dime brought in from this Kickstarter will go toward improving the project.”

To me, a book filled with essays from podcasters sounds interesting. It’s definitely a different genre than the podcasting related books that instruct people about how to create, and monetize, a podcast. The Kickstarter much reach its goal of $800 by September 5, 2017, in order to be successful. If it fails, it sounds like the book is going to get published anyway. 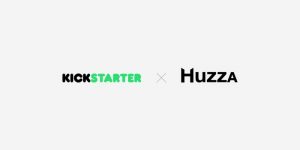 Those of you who have attended Blizzcon in the past two years may have heard about World of Podcasts. The event was in its second year in 2014. It included panels of podcasters whose shows focused on one of the games made by Blizzard Entertainment. Since last year, World of Podcasts has gotten bigger and is now called Con Before the Storm.

World of Podcasts is not an official part of Blizzcon. In October of 2014, I interviewed Xia who is one of the people who helped create and organize World of Podcasts. I was able to attend their 2014 event, and it was a blast!

The World of Podcasts event was held the night before Blizzcon started and it featured panels of podcasters whose shows focused on video games made by Blizzard Entertainment. In 2014, there was a whole lot more going on including an art gallery, a Hearthstone tournament, and a fun photo area with backgrounds from Blizzard’s games.

This year, World of Podcasts has grown and become Con Before the Storm. Once again, it will feature podcasters whose shows focus on the video games made by Blizzard Entertainment. This year, in addition to the panels, the event will have a good way for people to chat with the podcasters after a talk has ended. In other words, people who want to connect with the featured podcasters will have an easier way to speak with them at the event.

There is a Kickstarter for Con Before the Storm. It has reached it’s original goal of $5,000 and is now working on funding some interesting stretch goals. For full details, I suggest you check out their Kickstarter. There is still time to get in on some of the rewards that connect to specific pledge amounts. At the time I am writing this blog, there are 25 days left before the Kickstarter ends.

The Con Before the Storm event/party will be held at the Hilton hotel that is near the Anaheim Convention center (where Blizzcon 2015 will take place). Having attending the first and second iteration of the event, I am certain that Con Before the Storm will be exciting and fun.