Live365 officially shut down about a year ago. Now, it appears they have returned, under new ownership. Live365 is going to focus on microcasters.

In January of 2016, Live365 was forced to do a massive layoff of employees after running into problems with new regulations that went into affect that month. The Copyright Royalty Board, which establishes the sound recording royalty rates that are paid to copyright holders, raised their rates for 2016. This change took place not long after Live365 lost the support of its investors. The result was that Live365 officially shut down in January of 2016.

Now, about a year later, Live365 has returned. The new owner is Jon Stephenson, who, according to the SharonHerald.com is an entrepreneur who acquired Live365 with plans to re-launch it in 2017.

Jon Stephenson’s Live365 will focus on “microcasters” (or very small radio stations). He told SharonHerald.com: “There’s over 80,000 independent online radio stations and Live365 had about 5,000 of them before they went dark.”

At the time I am writing this blog, Live365 has a waitlist for those who want to reserve their spot. Their pricing plans have been posted:

All pricing plans come with unlimited listeners, unlimited bandwidth, and the ability to go live. Music licensing is included. There is a way to monetize your audience and earn revenue. The Live365 website says the following about music licensing: “We cover ASCAP, BMI, SESAC, and SoundExchange royalties for US-based listeners. In addition, intuitive reporting and geo-filtering available for International listeners.”

By comparison, as recently as July, 2015, the old Live365 charged $39 a month for a similar tier of service that covered music licensing fees, but with 500 fewer listening hours. The new Live365’s $99 a month plan is actually more generous than the old company’s $109 plan, offering 500 more listening hours for $10 less.

Paul Riismandel also has good details about how Live365’s new plan compares with other, similar, services. The big question, of course, is will the new version of Live365 do better than it’s previous incarnation did? We will have to wait and see what happens.

We noted earlier this month that things weren’t looking good for long-running online radio service Live365. The problems the company is facing have turned out to be more than it could handle and Live365 will be shutting down completely on January 31, 2016. Last week, Live365 issued this statement to all of its registered users:

You should have already received our notification and link to the press release regarding two issues that have affected Live365 in the last few weeks.

We are sad that we are closing our doors at the end of this month. There are always possibilities that we can come back in one form or another, but at this point in time, January 31, 2016 is the last day that Live365’s streaming servers and website will be maintained and supported.

This is a surprise to us as it is to all of you.   We are proud that Live365 was a pioneer in the streaming music business and have provided a platform to hundreds of thousands of broadcasters to have a voice over the years.

Unfortunately, we have to say good bye.

Along with this announcement, Live365 has recommended StreamLicensing.com and StreamGuys to users who’d like to continue running their online stations. Live365 is suggesting that users who migrate to either of these service let the new services know that they’re coming from Live365.

Long-running Internet radio service Live365 may be in its last days. The news came without warning over the weekend as the company was forced into a massive layoff of employees. Live365’s troubles were set off by new regulations that take affect this month. Those regulations, enforced by the Copyright Royalty Board, change how music royalties are calculated for Internet radio broadcasters. From a Live365 press release:

Recently, the Copyright Royalty Board, the governing entity for establishing the sound recording royalty rates that are paid to copyright holders, has published the new rates for 2016-20. The previous provisions for small webcasters to opt for a percentage of revenue model were not renewed. The current provisions end at the end of 2015. The absence of this license will make legally streaming copyrighted musical content prohibitively expensive for many small to mid-sized Internet broadcasters. Live365 relies on this license for many of their broadcast partners and, as such, has hard decisions to make regarding their future in the streaming industry.

Before these changes came into place, Live365 could make its royalty payments based on a percentage of the company’s revenue. It looks like Internet radio stations that play copyrighted music will now have to pay some sort of flat rate or per-song fee, regardless of revenue. Considering Live365 hosts thousands of small stations, a change like this would be devastating.

To make matters worse, Live365 also lost all of its financial backers:

Two weeks ago, Live365 faced an additional blow, losing the support of its investors who have helped the company with its mission for over a decade. The company was forced to significantly reduce staff and is now actively looking for partners to help continue the service into 2016.

It’s unclear if those investors backed out due to the upcoming royalty rate changes or if something else scared them off. For now, Live365 is still in operation. The company is being run by a small team and its CEO is actively looking for new investors.

Blubrry has partnered with Live365 and together they are introducing Podcast2Radio. Podcasters who sign up for Podcast2Radio will immediately have access to the millions of listeners that stream content via Live365 distribution partners.

It is easy for podcasters to get convert their shows into a curated stream.
* Sign up for a Podcast2Radio account.
* Download Studio 365 software (for free)
* Upload your episodes/shows
* Create a playlist
* Start your station and get distribution

When you finish doing those simple steps, Podcast2Radio will push your podcast out to radio directories such as Live365, TuneIn, Windows Media Guide and more. They will also get your podcast on in-home (and in-office) digital services such as AppleTV, Roku, Kindle Fire, and more. Your podcast will also appear on mobile apps including iTunes, Android, and Pioneer. 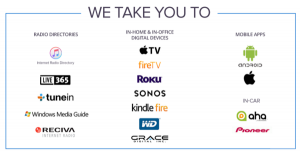 The Live365 platform is going to help podcasters to get their show on almost all streaming platforms. It gives podcasters plenty of opportunity to have their show discovered by new listeners and to increase their audience size.

Blubrry, as you may already know, is a podcasting community and directory that gives creators the power to make money, get detailed audience measurements, and host their audio and video. Live365 started in 1999, and is the original and leading online radio network offering broadcast services and streaming radio programing.