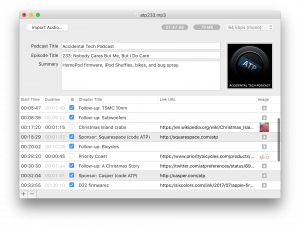 Forecast was created by Marco Arment. It is a Mac MP3 encoding and tagging tool for podcasters. It started out in beta, and is now available to everyone. Forecast is a tool that can save time for podcast producers.

The last thing podcast producers need is more tedious, manual steps to publish each episode. Forecast automates common workflows and saves time even if you never use chapters. And if you want to add chapters, it has never been easier.

Forecast has an autofill function that embeds artwork, title, and description in each MP3. Name your input files with the same prefix and numbering system each time (for example: atp100.wav, atp101.wav) and Forecast will automatically fill in the title, artwork, and episode number.

Forecast has a chapters function. Podcasters do not necessarily need to use Chapters if they do not want to. It is possible to use Forecast just for the autofill function.

If you do use the Chapter function, Forecast will remember and autofill the most recently used URL and/or image for each chapter title, saving you a bit of time if you have repeating chapters over multiple episodes or between multiple shows.

I recommend visiting the Forecast website to get the full details of what it can do. I listed just a couple of things here in this blog. Forecast is free. The latest version for macOS is Version 0.9 (123). You can download it from the Overcast website.

It’s generally accepted that podcasting began to truly coalesce into a recognizable medium in late 2004. Considering the timeframe, it’s no surprise that mp3 became the most popular choice for audio encoding of podcasts. Other formats were definitely available. But mp3 files were a ubiquitous part of the digital-music revolution that had taken place in the years leading up to podcasting’s beginning. Due to its widespread use by consumers, mp3 was an obvious choice for podcasters to use when encoding their shows.

Every few years, one group or another would make some noise about how podcasting needed a “better,” or more “modern” format for encoding audio. Despite those efforts, nothing came around that worked as a true replacement for mp3.

Fraunhofer, the German technology company that’s held patent and licensing rights for the mp3 format for decades, recently announced that its mp3 licensing program was terminated:

On April 23, 2017, Technicolor’s mp3 licensing program for certain mp3 related patents and software of Technicolor and Fraunhofer IIS has been terminated.

We thank all of our licensees for their great support in making mp3 the defacto audio codec in the world, during the past two decades.

In its statement, Fraunhofer noted that there are more advanced audio codes available today, like AAC. This statement led to a chorus of “mp3 is dead!” cries from the tech press. Marco Arment, developer of the popular podcast app Overcast, took to his blog to shoot down the notion that the mp3 format was now over:

MP3 is no less alive now than it was last month or will be next year — the last known MP3 patents have simply expired.

So while there’s a debate to be had — in a moment — about whether MP3 should still be used today, Fraunhofer’s announcement has nothing to do with that, and is simply the ending of its patent-licensing program (because the patents have all expired) and a suggestion that we move to a newer, still-patented format.

The “mp3 is dead” meme began to resonate at such a high pitch that Fraunhofer came back a few days later to clarify what its original statement actually means:

…does this mean that mp3 is really dead now, as we have read often in the last few days? Of course not! mp3 is a phenomenon, which changed our way of consuming music forever, and is very much alive in 2017.

The licensing program coming to an end is due to the fact that the last patent included in the program expired. In no way does that mean that the usage permit ends. The only ones deciding on the “death” of mp3 will be the users, who might switch to more modern audio formats at some point, such as AAC, which is included in almost every smartphone today.

It seems inevitable that some other format will eventually eclipse mp3 for both music and spoken-word audio. But that day is not yet upon us. If you’ve been concerned about this news and contemplating a format change for your show, relax! MP3 is likely to still be here for quite some time.