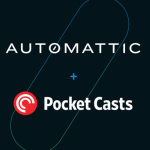 Pocket Cast will be joining Automattic, making it easier for fans to discover new content and customize their listening experience.

Pocket Cast announced it will be joining Automattic, the parent company of WordPress.com. More than 80M people in the US listen to a podcast weekly, and this critically acclaimed podcast app makes it easier for fans to discover podcasts and customize their listening experience. Pocket Casts has been recognized by The New York Times, WIRED, The Verge, and other top publications for its exquisite design and user-friendly features.

As part of Automattic, Pocket Casts will continue to provide you with the features needed to enjoy your favorite podcasts (or find something new). We will explore building deep integrations with WordPress.com and Pocket Casts, making it easier to distribute and listen to podcasts. We’re thrilled that we can continue to give our users a multitude of ways to tell and engage with stories that matter.

Co-founders Russell Ivanovic and Philip Simpson will continue to lead Pocket Casts as part of Automattic.

You are probably using one or more products that Automattic has acquired and continues to build on. The company may be best known for WordPress.com, in addition to its non-profit and Open Source projects like WordPress.org. WP for iOS, and WP for Android. In addition to acquiring Pocket Casts, Automattic acquired Tumblr, Day One, Jetpack, and Gravatar.

Pocket Cast has been acquired by NPR, WNYC Studios, WBEZ Chicago, and This American Life. This unprecedented collaboration furthers public radio’s leading role as an innovator in audio discovery and distribution, while ensuring the continued support and growth of one of the most popular listening platforms on the market.

Audio veteran Owen Grover will serve as CEO of Pocket Casts. Grover previously served as Executive Vice President and General Manager at iHeartRadio, and before that as Vice President of Programming and Marketing at Clear Channel Music & Radio.

Pocket Casts will operate as a joint venture, with founders Philip Simpson and Russell Ivanovic in leadership roles and the existing staff and developer team remaining in place. To ensure development aligns with the mission-driven ethos of public radio, the board will be compromised of representatives of the public media leaders.

Shifty Jelly created Pocket Casts in 2008. Pocket Casts published a blog post titled “The Next Chapter” on May 4, 2018. The key part of the post states: “Today we’re excited to announce a partnership with some of the biggest producers of podcasts in the world to take Pocket Casts to the next level.” Pocket Casts reviews how important it is for them to keep the best interests of their customers in mind, and that they had turned down previous acquirement offers that they felt were not the best fit.

That’s why when a combined group comprised of WYNC, NPR, WBEZ, and This American Life approached us with the goal of partnering for the good of the entire podcast industry, we knew that this opportunity was something else entirely. Everything from their not for profit mission focus, to their unwavering belief that open and collaborative wins over closed walled gardens deeply resonated with us. Together we have the passion, scale, and laser focus needed to achieve some truly great things.

The blog post has a list of questions that Shifty Jelly figured customers would be asking in regards to the acquisition. On May 8, 2018, Shifty Jelly followed up with a post titled “Addressing Your Concerns”. In the post, users of Pocket Casts are reassured that Pocket Casts will not start tracking user locations, and that it will not start pushing invasive ad technology on people (among other concerns).