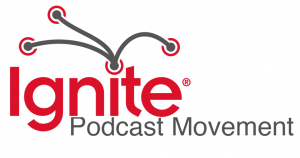 Relive Ignite Podcast Movement 2017 again and again! We recorded every hilarious, inspiring, and educational movement and have them available for you to enjoy here or on YouTube.

Ignite Podcast Movement is a unique speaking event where a series of speakers get on stage for five minutes each to share a Spark. A Spark is a 5 minute talk that consists of 20 slides. Each slide is on a 15 second auto advance. Each Spark is designed to educate and entertain. 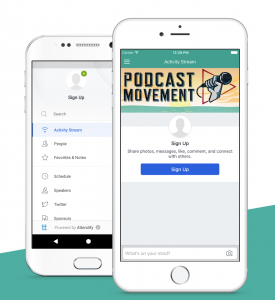 Podcast Movement 2017 has announced that some of the members of The Association of Independents in Radio (AIR) will be speakers at the event. There is a special discount code that people can use to get 20% off a one-year AIR membership.

AIR was founded in 1988 by ten independent radio producers at a kitchen table on Murray Street in New York City. Their international network has expanded to 1,100 makers powering public media and podcasting. AIR is based in Boston, and it identifies, cultivates, and deploys storymakers who create innovative work and find resources in digital, broadcasting, and podcasting.

Want to become a member of AIR? There is a special discount code you can use that is on the Podcast Movement 2017 website. It gives you 20% off an AIR one-year individual membership.

Podcast Movement 2017 has revealed who some of their Keynote Speakers, Speakers, Panelists, or Session Leaders at the 2017 event in Anaheim, California. There will be over 150 speakers and panelists in all.

Ignite Podcast Movement is an event that nearly any Podcast Movement attendee can take part in. Ignite talks are called “Sparkes”. Each Spark is five minutes long and has 20 slides… on a 15 second auto advance.

Those who are attending Podcast Movement 2017, and who want to do a Spark, can submit their topic. The Sparkes will be presented on the big stage on the evening of August 22, 2017. Each Spark is designed to educate and entertain. The attendees of Podcast Movement 2017 can vote for their favorite Spark.

A Spark does not have to be focused on podcasting. Any topic is “on limits” at Ignite. It is presented in an irreverent format, and speakers are encouraged to think outside the box and share fun, unique, and interesting stories.

Podcast Movement 2017 will take place in Anaheim, California, on August 23-25. The event has a habit of slowly announcing who the keynote speakers will be.

Rabia Chaudry, Colin Miller, and Susan Simpson are the hosts of Undisclosed.  All three hosts will be keynote speakers for Podcast Movement 2017.

The Undisclosed Podcast investigates wrongful convictions, and the U.S. Criminal justice system, by taking a closer look at the perpetration of a crime, its investigation, the trial, and the ultimate verdict… and finding new evidence that never made it to court. Undisclosed is now in its third season. The hosts went from having no podcast experience to having one of the most popular shows in the world with millions of downloads.

Shannon Cason, who preformed at SXSW in Austin in March of this year, will be a keynote speaker at Podcast Movement 2017. He is the host of Homemade Stories, which partnered with WBEZ Chicago for the 2014-2015 season. Shannon Cason is a storyteller and writer, and is originally from Detroit.

Dan Carlin is the host of two popular independent podcasts: Hardcore History, and Common Sense. Dan Carlin is an American political commentator and podcaster who was once a full-time radio host. Podcast Movement describes Dan Carlin this way:

Part storyteller, part analyst, Carlin has mastered the art of looking at subjects from multiple angles and dissecting and thinking about them in original ways. He isn’t afraid to go deep or to inject historical context into modern debates. Whether it’s history or current events he’s discussing, his passion is contagious, his approach is refreshing and his ideas tickle your brain in all the right places.

Podcast Movement points out that it is rare for Dan Carlin to take the stage at live events.

Podcast Movement officially begins at 10:00 in the morning on Wednesday, August 23, 2017. They invite you to check out everything that is going on Tuesday, and to get an early jump on registration.