Podomatic, a podcast publishing and hosting platform, has partnered with Weebly, a website builder. Together, they will help podcasters create brilliant podcasts and websites that work across any device.

This new feature is included in the price of the hosting and publishing service on top level accounts and provided at no additional cost. It allows code-free website editing and building, as well as provides an e-commerce platform.

Podomatic provides all the tools you need to manage your podcast and your site under one account. Some of the benefits of the new service include:

At the time I am writing this, Podomatic is offering their most popular podcasting plan at 75% off the usual price. For a limited time, you can get their PRO plan for only $2.50 a month. (Usually, the price is $8.32 per month). 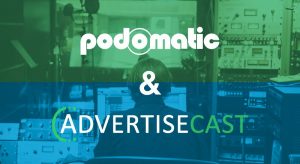 Podomatic helps podcasters to reach an audience with free podcasts, customizable embedded players, and promotional tools. Podomatic has partnered with AdvertiseCast, which makes it easier for advertisers to buy ad spots from podcasters online in one centralized marketplace.

AdvertiseCast is the premiere online advertising marketplace that connects advertisers with podcasters. Their system makes it easy for you to get sponsored, and they take care of everything from finding advertisers, ad buying, payouts, and more.

Here’s how this partnership works. First, “dig deep inside your soul and make a podcast” (says Podomatic). Next, join Podomatic and add your podcast listing to the AdvertiseCast marketplace for free. Choose the ad campaigns that best fit your podcast.

Describe your podcast and select which ad products you are willing to sell. AdvertiseCast splits the revenue between themselves and the podcast. Podcasts keep 80% from every sale. Advertisers can order your ad spots – and podcasters have the right of refusal by approving or disproving the order. AdvertiseCast wants to make sure that advertisers are a good fit for your show. Fulfill the ad order as requested and get paid.

Podomatic PRO Podcasters have the additional functionality of Stats Verification, which provides potential advertisers with additional information to make ad buying decisions easier. With a Podomatic PRO membership, you get the exclusive option to have your stats in AdvertiseCast validated by Podomatic, increasing your chance of connecting and creating campaigns with advertisers.

Patreon provides a simple way for podcasters to monetize their podcasts. Podomatic helps podcasters reach an audience with free podcasts, customizable embedded players, and promotional tools. The two companies have partnered – and the outcome could benefit podcasters.

Patreon is integrating with Podomatic so that podcasters can easily monetize their business and build a closer network with their fans. If you want to make use of this integration you need to have a Patreon for your podcast and have your podcast on Podomatic.

The purpose of this integration is to make it easy for your followers on Podomatic to see how they can contribute more to your work. A listener who is already looking at your podcast’s page on Podomatic can click a button and go right to you Patreon. That’s quicker and easier than if they had to go searching for your Patreon themselves.

It should be noted that podcasters can use Patreon without using Podomatic, and can use Podomatic without using Patreon. The partnership between the two companies could be beneficial for podcasters who are already using both services, or who are using one and were considering using the other as well.

Media hosting and podcasting services company Podomatic announced a year-end promotional deal as well as some new features in its November newsletter. And while the newsletter doesn’t specifically state that the company is trying to court SoundCloud users, it kinda looks that way.

First off, Podomatic has developed an inline Facebook player for its users. This allows clickable players to automatically spawn inside of users’ Facebook feeds. From the newsletter:

…we’ve released a brand new Facebook timeline player with a slick new design and improved sharing capabilities. While other companies are removing Facebook players entirely, we realize how important it is for our podcasters to have their content shared with the world, from anywhere in the world.

Earlier this year, SoundCloud disabled its own Facebook player, which caused a lot of consternation among users. This is probably what Podomatic’s referring to with that “other companies” line.

Second up, Podomatic has created a tool to import media directly from SoundCloud accounts:

Providing our podcasters with a centralized and secure location for their audio files is a commitment we take very seriously. We know how important it is to have your content readily available for your listeners 24/7 without the worry of your work being removed. With our new import tool, you can now transfer all of your episodes and mixes from any hosting site to Podomatic effortlessly, all with just a click of a button.

While the newsletter says Podomatic will import media from any service, its import page sarcastically asks, “Had enough of SoundCloud?”

Finally, Podomatic is having a Fall Sale, with an offer of three months free media hosting with the promo code FALL2015. The Fall Sale offer is good thru December 7, 2015.

Anyone who’s followed podcasting trends in 2015 has seen plenty of negative news when it comes to SoundCloud. So, it’s no surprise that Podomatic is trying to target SoundCloud users. If things continue on as they have for SoundCloud, this tactic might just pay off for Podomatic.