Radiodays Europe decided to postpone the conference due to increasing health risks in many countries associated with COVID-19. An announcement about this change was made on March 9, 2020. At the time, Radiodays Europe stated that the new dates would be released at a later date.

Radiodays has announced today new dates for the Libson 2020 conference which will now be held on 13-15 December 2020. The event is postponed until late in the year because of Coronavirus COVID-19. All tickets purchased for Radiodays Europe 2020 in March are valid for the new dates in December. The location for the conference remains the same, the Centro de Congresses de Libson (CCL) in Portugal. We thank you for your continued support of our hosts and partners.

Radiodays Europe starred in 2010 as a response to the European industry, public and private, to come together to discuss the new media challenges, across borders. It has since grown to become the most important annual conference for radio professionals with over 1,500 participants from 62 countries. It is the meeting point for the European radio industry, and a destination for radio people from around the world.

With that said, it is easy to see why the people who had purchased tickets to attend Radiodays Europe 2020 would be happy to learn that the conference will still happen. Hopefully, the risk from the coronavirus will not be something people have to worry about anymore in December of this year.

Radiodays Europe announced that London will be the host city for Podcast Day 2019. The event will take place on Thursday, June 13, 2019, at King’s Place in central London. It is the third Podcast Day.

Radiodays Europe (RDE) Podcast Day is a satellite event from the team that brings you Radiodays Europe each year. Podcast Day was created in response to the need to bring together the Podcast world in Europe. The first RDE Podcast Day was held in 2017 in Copenhagen, Denmark. Attended by over 200 participants it was a day which focused on innovation in this new area of radio.

Registration for Podcast Day 2019 is open. The registration is being done through Trippus.se, who will accept VISA and MasterCard. It appears that there is a fee in addition to the price of the ticket.

King’s Place, which is located in the heart of King’s Cross, was selected as the venue for Podcast Day 2019. It houses the first new build public concert hall to be built in central London since the completion of the Barbican concert hall in 1982. It is a five minute walk from two mainline stations and has four hotels just three minutes’ walk away.

At the time I am writing this blog post, there are few specific details about what to expect at Podcast Day 2019. Radiodays offers a look at the program from 2018 as an example. The program for Podcast Day 2019 will start being produced at the end of 2018. 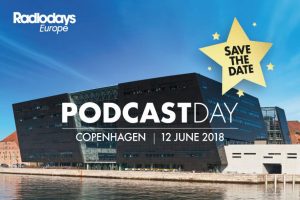 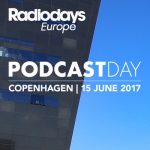 RadioDays Europe (RDE) is about radio’s future, but also about sharing experiences from the best of radio today. RDE was born in 2010 as a response to the European industry, public and private, to come together to discuss the new media challenges, across borders. RadioDays Europe Podcast Day will take place on June 15, 2017.

Podcast Day is a new event focused entirely on the fast-moving world of Podcasting. It will be held in the Rai Convention Centre, Amsterdam, Netherlands. (RDE has stated that the venue for Podcast Day 2018 will be Vienna.) Podcast Day will offers sessions about content, storytelling, platforms, audiences, and the business models for podcasting.