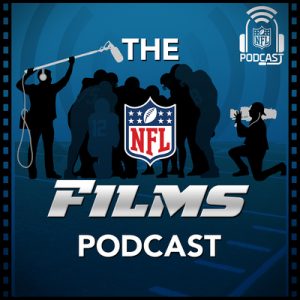 The NFL Films Podcast is the perfect crossover between movies and sports. It builds on the legendary archive of NFL Films, which is unparalleled in sports for capturing the dramatic on-the-field history of the game.

The NFL Films Podcast is hosted by NFL Films producers Keith Crossrow and Paul Camarata. Each conversation features exclusive clips, rare mic’d up sounds and that unmistakable music, interviews with legends, and an exploration into the subject matter and storytelling of NFL Films’ latest works. Those works include NFL Network’s A Football Life, and The Timeline, Amazon’s All or Nothing, HBO’s Hard Knocks, and more.

At the time I am writing this, The NFL Films Podcast has released a Introduction and two full episodes. In the first episode, NFL Films Producers Keith Crossrow and Paul Camarata dive deep into the making of Emmitt SmithL A Football Life with Emmitt Smith himself. In episode two, Coach Jerry Glanville joins the show and the discussion is about the ’91 Falcons.