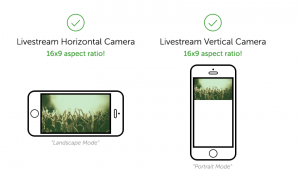 Live-streaming media service Livestream has added a new “vertical broadcasting” capability to the iOS version of its Livestream Producer app. Vertical broadcasting allows users to maintain a 16:9 aspect ratio for video, even if the phone is held vertically. Most camera-based iOS apps change their aspect ratios based on if a device is being held vertically (with the “top” of the device facing up) or horizontally (with the “top” of the device facing left or right). It’s often easier to hold a device in vertical mode rather than horizontal mode. But this can often lead to the undesired “vertical video” effect. From Livestream:

“In previous versions of the Livestream app you were required to turn your device to ‘landscape’ mode (horizontal) in order to broadcast. There are some benefits to using the camera horizontally but the primary reason we locked it was because ‘portrait mode’ would have resulted in a vertical video, which most users don’t like.

However, there are some fundamental problems with using the camera in landscape mode. First, if you’re broadcasting a live event for any length of time that exceeds a few minutes it can be tiring to hold the device horizontally. It is also inconvenient to chat with your audience when the keyboard and messages are overlaid on top of the video.

With the newest version of the Livestream app for iOS we’ve developed a way to let you hold the device vertically while continuing to stream perfect 16/9 video. This makes it both more comfortable to hold for long periods of time and easier to chat with your audience.”

If, for some reason, you really like vertical video, don’t fret. The new Livestream app offers you the option of switching between portrait and landscape modes. So, you can still make skinny videos with black bars on the sides if that’s your thing.

The  Livestream producer app is available as a free download from the App Store.