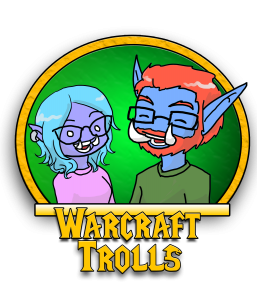 Meagan is the co-host of the Warcraft Trolls Podcast. She does the show with her husband, Ward. Their podcast is focused on the World of Warcraft video game (which is made by Blizzard Entertainment). No, the show isn’t about how to be a “troll” online!

I first got into podcasting when I met Dustin, who runs Trollcasts.com. about three years ago. We were both in the same World of Warcraft guild, and quickly became friends. Back then he and another gentleman had several podcasts going on on what they called “The Trollcasts Network”. There was “Media Trolls” and “Political Trolls”, and yes, they did mean THAT kind of troll. Mostly they just argued about random topics, but it interested me. So I started making a brief little pop culture podcast called Thinking Too Hard. Just me and my onboard laptop mic, talking about anything that interested me that week for about 15 minutes. I covered subjects ranging from the new Diablo game to the original Twilight Zone series. I didn’t want to pin myself down to any one topic.

Dustin invited me to become a regular co-host on the “Media Trolls” show. I had a great time at first, but I soon butted heads with the other co-host. In the beginning, things were friendly. A little ribbing here and there. But the one sticking point between us was that he hated feminism, “femnazis”, and anything that progressively promoted the rights of women. I won’t get into it too much, but the old shows are still up for listening. Although the “Media Trolls” eventually fell apart, it really forced me to crystalize my own feminism. To get more involved in women’s rights and learn more about the portrayal of women in media. I had to argue my points weekly. Eventually, the other host quit to pursue other ventures, and Media Trolls died.

How did you come up with the name “Warcraft Trolls”? What topics does your podcast cover?

I wanted to do a new show with my husband, Ward. He wasn’t a regular on Media Trolls, but I always thought he was great when he joined us. So I decided to do a show about the subject we share the most in common: World of Warcraft. Since the site was Trollcasts.com, and the other shows all had Trolls in the name, and Trolls are also a playable race in World of Warcraft, we named the show “Warcraft Trolls.” Warcraft and Blizzard podcasts were and still remain very popular, with new ones springing up all the time. We flourished in the community, made friends with other podcasters and World of Warcraft players, and generally have a great time doing the show. In the beginning, we tried to keep things organized. We would write outlines, take notes, try to keep on track. But we slowly realized that our charm was in our rambling disorganized style. That while most Warcraft Podcasts acted like a radio program, with news stories, interviews, debates and discussions, our show was more like being invited to dinner with us. To sit and talk about the game and whatever was going on in our lives. It was our way to stand out among the many, many other Warcraft Podcasts. It’s served us well.

What words of wisdom do you have for women who are thinking of starting their own podcast?

Going back to the beginning, back when I was first starting out, I was nervous about being a woman in a public space. Never mind a feminist in a nerdy/gamer space. I’d seen the fall out and the abuse other women suffered for speaking up about their feminist leanings and critiques of spaces that are often still treated as a boys’ club. And in the beginning, I tempered myself. I knew my own feelings and beliefs, but I thought, “This doesn’t have anything to do with the subject at hand. Even if someone is being sexist/homophobic/racist, I’ll just smile and keep my mouth shut.” I did that for my own protection, and I regret it. Eventually I reached a breaking point. My own line in the sand, I guess. I still remember it. We were discussing the extended Star Wars universe on Media Trolls, and the other host was talking about this “hot” alien race of female sex slaves. He said that it was okay because they “chose” to be sex slaves. And I just snapped. “They didn’t choose, they were created by men. They are a creation. The choice was made by men to make their objectification seem more okay.”

Once I spoke up, I couldn’t go back. And although I’ve gotten some pushback, I’ve also met amazing feminists, amazing women, amazing people that understand and support me. Whenever another woman comes to me saying she wants to start a podcast, but she’s nervous about how she’ll be received, I tell her to go for it! Your voice matters. Speak your mind. Learn, debate, speak out and always be true to yourself. Whether you want to discuss knitting or video games or cooking or movies or anything else. There is no harm in trying. In expressing your thoughts. The internet can be a very scary place for women. But we are half the world, and half the internet. And there will always be other women out there to get your back.

One thought on “Women in Podcasting: Interview with Meagan from Warcraft Trolls”