“Get to the point!” might be the overall theme of most Internet and media-based services in recent years. First, there was Twitter with its 140-character limit. Then came Vine with its seven-second videos (which inspired Instagram to add its own video component). It seems only logical that this micro sizing of content would eventually come to podcasting. Most notably, this is happening with Clammr, which has become a much talked about podcasting app as of late. Today, I discovered another service that’s getting in on the micro-podcast bandwagon: Out Loud.

Out Loud describes itself as, “…a place to hear people’s voices and to share your own. Like podcasting, but easier and shorter. Posts are capped at 20 seconds – enough time to explain a thought, or to tell a joke.” Out Loud offers a simple web interface to listen to others’ audio clips as well as to create and share your own. Clips can be submitted anonymously or you can log in to the site using a Facebook account. (Currently, this is the only method given for logging in.)

Out Loud posts are ordered into “Streams” by specific categories. For example, there’s an “Everything” stream which, as you can probably guess, includes all of the posts made to the site. There are also self-explanatory Streams like “Jokes” and “Music.”

To add your own sounds to Out Loud, simply click the microphone icon at the top of the screen. (Note: If you’re using a Mac, you’ll need Google Chrome to record. Out Loud’s recorder doesn’t work with Safari.) This’ll take you to the Out Loud recorder (be sure to login first if you don’t want your audio to post anonymously): 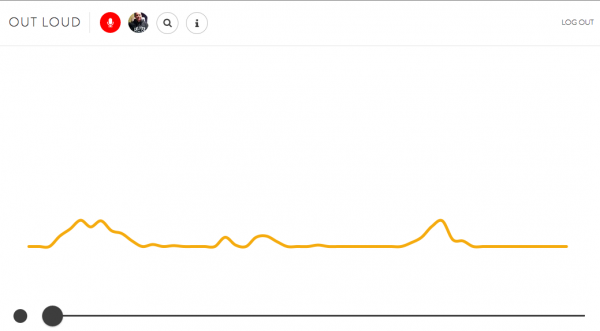 Clicking the round circle on the bottom left-hand side will engage the recorder. I posted a quick introduction for myself and then clicked the circle again to stop the recording. From there, I could add a caption, choose an Out Loud stream for my audio and then delete, preview or publish the audio. 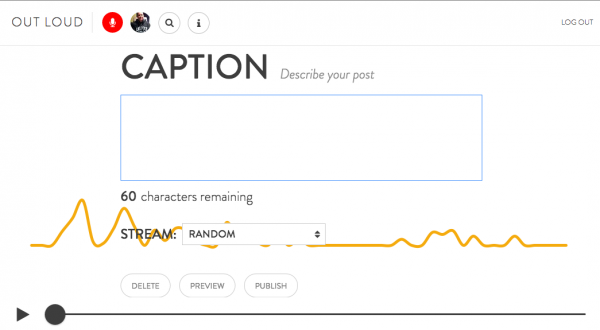 I typed a caption and added my first Out Loud clip to the “Just Saying Hi” stream where it’s now live on the site. 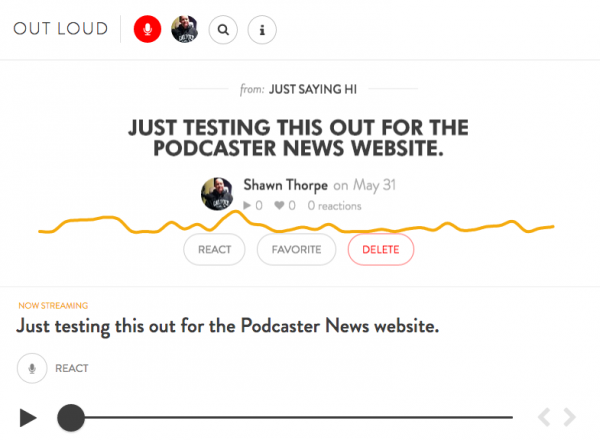 Out Loud isn’t kidding about how simple it is. With just a few clicks, it’s possible to add audio clips to the site. But now the question is, where do we go from here? Out Loud has typical interaction features like being able to follow other users and “react” to their posts. But this makes for an insular experience as there’s no built-in way to share clips via social media and there’s no way to subscribe to Out Loud content using RSS.

Out Loud is clearly in the early stages of development. Time will tell if it grows into something more over time. For now, its simple interface and ease of use make it a fun diversion for anyone looking to post or listen to short bursts of audio.