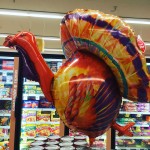 Going along with this idea seems to be one commonly heard in the podcast-o-sphere. There is talk that releasing a fantastic episode for Thanksgiving could not only make your loyal listeners that much more interested in your podcast, but might also draw in new listeners.

Following that line of thought is the hope that at least some of the people who heard your extra-awesome episode will contribute to your Patreon. You do basically have a captive audience of commuters, right? Some of them might appreciate a well done podcast to listen to while they travel.

In general, I think the idea that: “Great Episode + Thanksgiving = You Win The Internet” is overly optimistic. It doesn’t take into account some of the realities surrounding Thanksgiving. Americans celebrate Thanksgiving in November. Canadians celebrate it in October. People in other countries might not celebrate it at all and have their big holiday meal with the family over Christmas.

While it is true that many Americans will have at least a few hours off during what has become “Black Friday Weekend”, your international listeners will be having a typical work week. As such, your extra special episode might have more impact if you post it for a milestone episode (like episode 100, for example) than if you release it during Thanksgiving. People from all across the world can take time to tune in to a milestone episode of a show they are interested in. It’s a bigger audience than you might get during the hectic Thanksgiving holiday.

Another thing to consider is what might seem natural, but can turn out very awkward. The first year I did NaPodPoMo almost all of the American podcasters did an episode about Thanksgiving on or after Thanksgiving day. This resulted in some interesting takes on the Thanksgiving holiday, and some fun soundscapes, but it was difficult to differentiate them from each other. Nothing stood out because they were all on the same topic at the same time.

Your listeners might find it strange if you spend an episode talking about an American holiday that takes place in November if it isn’t something that fits the general topic of your podcast. Historical podcasts could delve into the pages of history to talk about the holiday’s origins. That topic might be a nice fit. Podcasts about travel might make that work, and so could family history or genealogy focused podcasts. However, podcasts about other subjects might not be an appropriate place for an episode about Thanksgiving.