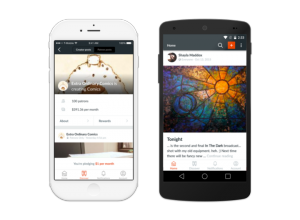 Pateron announced this week that it now has mobile apps that are available on both iOS and Android devices. Those of you who have a Patreon attached to your podcast probably received an email about this when the apps launched. Patreon also tweeted about their new apps.

Do you have the Patreon mobile app?! Available for both iOS & Android 🚨📲💥https://t.co/T5DPCf4tR0 & https://t.co/LvTFbNiq1q

Now, you can take Patreon with you wherever you go (if you have an iOS or Android device). Someone on Twitter asked Patreon if they had plans on making the app for Windows Phones. Patreon responded that they had “no plans yet”.