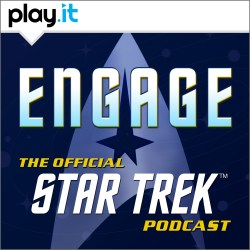 CBS Radio, CBS Local Digital Media, and CBS Consumer Product have announced the launch of Engage: The Official Star Trek Podcast. It is going to be exclusively hosted on the podcast platform Play.it.

The first three episodes of the hour-long podcast will be available on June 15, 2016, via Play.It, iTunes, and StarTrek.com. New episodes will be released weekly starting on June 22, 2016. The podcast is a celebration of Star Trek and is aimed at both old and new fans.

Engage: The Official Star Trek Podcast is hosted by Jordan Hoffman, who is a film critic and writer of the “One Trek Mind” blog on StarTrek.com. Interestingly, this year is when Star Trek will celebrate its 50th Anniversary. What a great time to release an official Star Trek podcast!

The first three episodes will feature some special guests, including “Weird Al” Yankovic and Adam Nimoy (son of the late Leonard Nimoy). Episode zero of the podcast has already been released. In it, host Jordan Hoffman is interviewed by Entertainment Weekly’s Darren Franich about what to expect from the podcast. They also share their favorite Star Trek moments.