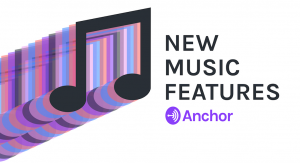 To be clear, Anchor separated the music that users select from the podcasts that users created. You could pick a song and add it to your station – but you could not use that song in a podcast episode on Anchor.

Until now, songs could only be added to Anchor stations and always expired after 24 hours. We heard from a lot of musicians, DJs, and music lovers – whose content heavily relied on the music they included – that they couldn’t really use episodes effectively. So we’ve made it possible to save songs, permanently, to your Anchor episodes. (Note that songs will not sync to your external podcast if you have one set up.)

Anchor has always had the ability to allow users to add full songs to their station with Spotify and Apple Music. Now, Anchor is allowing people to connect their own playlists so they can easily browse through them and add their current favorite songs to their Anchor station whenever they want.

You can add multiple songs from a single playlist in a row. If you find a song you like while listening to an Anchor station, you can tap to add that song to your Spotify or Apple Music account.