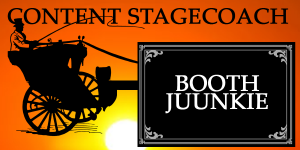 Humans have been traveling since – well, since Humans popped up, and what our collective travel experiences indicate is that there’s always something new to learn about. Time to Climb Aboard the Content Stagecoach and learn about new content!

We as podcasters are literally  GEAR JUNKIES. From the Podcaster that buys every new “thing” to the podcaster that WANTS to buy every new thing to the guy that HAS bought everything and it sits waiting in boxes in the basement – we are addicted to gear contemplation and acquisition. One of the most-focused cravings for is when anyone says or reads the word MICROPHONE. Ahh, microphones, the true luscious taste of digital sin, bitter the taste – that triggers visions of our available funds in a variety of all-too-limited bank accounts.

I recently had my Heil Fin microphones (used in our voiceover booths and The Podcast Bug) serviced and while putting a short polish on them, I was surfing through YouTube’s growing listing of digital libraries and – oh – whats this? A microphone review, for those interested in utilizing mics for voiceover. Very interesting…

After having clicked the fun image of a guy with a a couple of akin mics who also had wild hair, i clicked the proverbial “Play” button and what lept out of the speakers in my West studio was… 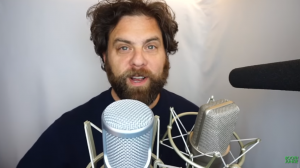 In this particular episode, the host Mike greeted us all, put on his appreciative, crown-like  headphones and began detailing the always-fun-to-watch-people-hate “Blue Yeti USB Microphone” that is not only a good deal but a good starter, entry-level microphone that I myself have drop-shipped to people for interviews, live music collection and a number of other capture missions over the years. Without getting into too much depth, the bottom line is that I think the Yeti has become an easy target and for the most part is a shat-upon viable, variable tool that gets the job done fast for a very fair price and let’s you be “up and running.” Still, the Yeti has legitimate quirks and viable feature sets…

..and here was The Booth Junkie going over them all, with focused detail, clear experience in the realm of audio collection (in particular, voiceover) and an engaging voice that isn’t just seasoned, but FUN. Those of you that take in as much audio “listening” as I do in lieu of say radio or music will know the value of a good voice, but also – a personality. Mike DelGaudio (wait a minute, the guy has the word AUDIO in his name? Seriously? Yes, seriously) delivers a variety of details, perspectives and KNOWLEDGE that educates even someone that thinks they “know it all” when it comes to audio intake. There’s another facet of Mike’s gallery and it’s that there is FUN, yes, but also play. There’s a small, subtle dance being done between the capture of the content, the visuals that you get but also in the text’d dialog on screen. It’s a treat to be sure and one that leaves you satisfied as the episode goes by because it makes you wonder which mic it is you’re actually listening to because – I mean, we know, right? We know which mic is which right? Riiight?

While there are a number of episode styles in his library, one that captured my attention was his overall microphone review of a HUGE and growing number of mics. What’s also clear is Mike’s zeal in learning more about how the various mics (that both companies and other “Booth Junkies” themselves can loan to him to test) is his natural delivery of opinion, thought and not “THIS PRODUCT SUCKS”, regardless of the experience or happenstance. It’s all engaging, filled with well-paced content that makes you want to continue listening to more while glancing now and again to see what a short silence or “about-to-guess-about-something” phrase flip will deliver for the viewer. Inside another microphone comparison video (the $50 mic VS. the $1000 mic), Mike shares a divine process and nugget at the end that is something I’d LOVE to share here to explain how exemplary it is but hell – then why wouldn’t YOU go check it out, right? 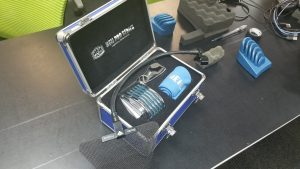 The last nugget that should showcase my interest in Mike in general is one I can’t wait to share a follow up article about. Mike’s listing of microphones he’s put to the test and in digital voice-capturing battle is missing a KEY element. A shiny weapon that I myself have had as a sidearm in all of my studios for the last 12 years poised in all battles for podcasting and voiceover conquest. An always available tool that turns heads, collects bright sound and ushers in reviews, education and perspectives of all kinds. The Heil Fin microphone – is in-bound to Mike in the friendly East-coast-based confines as we speak for yet another engaging focus online. I. Can’t. Wait. It’s almost as if I am – addicted – to what he’s going to say? Where’d I put that mishapen’d spoon and rubber tube?

Turning to the digital pages that comprise YouTube.Com content today is a ROUGH road, but for those of us who like gear, let me confirm one thing: If you’re looking or detail about audio, in particular microphone-captured audio, by a guy named DelGaudio, with fun, engaging attitude that makes you send gear host-ward, then I have the PERFECT subscription to feed the poison stream of GEAR ADDICTION, and it’s right over here – you know the Booth – with the Junkie in it.

Tell him that Mike Wilkerson sentcha’.