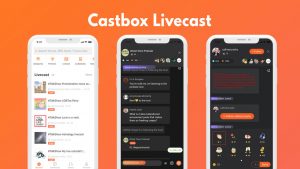 Castbox announced the launch of Livecast, a free audio streaming service that lets podcasters go live with the tap of a button. Available on Castbox mobile and desktop apps, the new feature allows podcast creators and influencers to host interactive audio shows and engage with fans and listeners in real-time.

With Livecast, creators can create public or private channels and go live with a single tap. Each Livecast session supports live audio chat for up to eight simultaneous speakers and unlimited listeners. The feature enables one or multiple hosts to drive the session and allows listeners to call in to ask questions, share their opinions and stories, and provide live feedback. Audience members can also interact with hosts and other listeners via in-room messaging, which encourages listeners to take an active role in the discussion.

Hosts can auto-record their Livecast shows and upload them as standalone podcast episodes to further extend the value of the content. Livecast also provides detailed metrics, including listenership, donations, and engagement, so hosts can improve their future Livecasts.

To give independent creators and studios new opportunities to monetize their brand and content, Livecast features a virtual gifting mechanism that lets listeners support their favorite podcasts. Users can purchase in-app currency to send hosts emoji-like virtual gifts such as an applause, roses, or even a golden mic. These gifts can be converted and cashed out for real world money via PayPal.

In July, Castbox announced Livecast. At that time, their description of the monetization system confused me. Now, it appears that Castbox has simplified things. The getting started page on the Castbox website says: Virtual gifts are converted into Stars, which can be cashed out by going to “My Wallet” under the “Personal” tab.

This explanation is much easier to understand than before. I still have some questions, though. How many stars does a Livecast podcaster have to accrue before they can cash out for real world money via PayPal? I’m also wondering if the podcaster gets all the funding that comes from Stars and/or the virtual gifts that listeners give them – or if Castbox takes a cut.