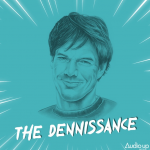 Dennis Quaid has launched his own podcast, The Dennissance, on Audio Up Media. (The name of the show rhymes with renaissance). On April 1, 2020, Dennis Quaid shared a statement to Billboard indicating that he intended to release his podcast via cassette. But, that turned out to be an April Fool’s Day joke.

Here is how The Dennissance is described on Apple Podcasts:

Dennis Quaid is a renaissance man who is one of the busiest people in show business. Besides being an actor, musician, songwriter, writer, and podcast pioneer, he is also a jet pilot, amateur astronomer, fly-fisherman, philosopher, low handicap golfer, medical safety advocate, and armchair historian.

He has powered a NASCAR around an oval track, given speeches and appeared before congress on patient safety, played golf with 2 presidents, piloted a dogsled in the arctic, meditated on the shore of the Ganges River in India, and has run cycled marathons, team-roped a quarter horse, trained dogs and people, pitched on the mound in Texas stadium, been a middle-weight boxer, and can change a diaper in 20 seconds…

The description continues, stating that all of Dennis’s famous friends have interests outside of the thing that they are known for. Each episode of The Dennissance features Dennis Quaid having a conversation with one of his friends. In one episode, he talks with Billy Ray Cyrus, and in another, he talks with John Carter Cash.