Broadcasting with audio only in Periscope is something the community has been asking for, and have been doing already by covering the camera lens. Sometimes people are not comfortable being on camera, but they still want to broadcast and interact with others via Periscope’s powerful chatroom feature. It was requested that we build this feature for #HackWeek, but after some research and focusing on the core of the problem we realized we could get it done in three days.

His Medium post also has a brief explanation of how audio-only broadcasting on Periscope works:

The iPhone microphone produces the audio stream and we continue to use that as-is. The camera produces a video stream that we immediately discard, and instead we create dynamic video animations informed by the audio data that we render on the iPhone in real-time. The audio stream is sent to the audio visualizer renderer which takes the raw audio bits and generates the waveform and volume levels indicator. This new stream is sent to backend instead of the one from the camera.

And, there you have it. Periscope made it easy for podcasters who don’t use video to do an audio-only podcast on Periscope. I don’t think most podcasters will decide to switch to Periscope exclusively as a result of this new feature. But, I can see the Periscope audio-only broadcasts being used as something “extra” for fans to enjoy.

Sometimes you just want to talk, without being on camera. We’re launching audio-only broadcasting, so your followers can hear, but not see you.

Rolling out now for iOS. pic.twitter.com/tBsm37NcdH

Periscope provides an easy way for podcasters to do a live show. People who watch the show can give the podcaster hearts – that flutter over the screen. It is a way to show that you love what a podcaster who is broadcasting on Periscope is doing.

The Super Hearts are not replacing the original hearts. Those will still be available for viewers to give out. You can only send Super Hearts to a broadcaster when they’re live.

If you want to send your favorite Periscope broadcasters Super Hearts the first thing you need to do is tap “get coins” on Periscope to purchase a coin package from the App Store or Play Store. Each package allows you to send Super Hearts until the coins run out. Once you stock up, you can select and send any of the Super Hearts.

What do Super Hearts do for Periscope broadcasters? “Each Super Heart is worth a different star value, and when a broadcaster receives Super Hearts, it contributes to their star balance.” That’s all.

Here are a few of the requirements:

I cannot think of a more confusing, complex, way of putting together a system that was intended as a way to enable viewers to support Periscope broadcasters. It takes several steps in order to obtain Super Hearts, and it not entirely clear from the announcement whether or not it costs real-world money to obtain the Super Hearts.  Viewers who go through all that can send Super Hearts to the Periscope broadcasters, or podcasters, they want to support. However, doing so won’t actually give real-world money to the broadcaster until and unless he or she is part of the Super Broadcaster Program.

Periscope makes it easy for people to explore the world in real time through someone else’s eyes. Podcasters can use it to do a live show and share it with the world as the show is being recorded. Periscope has introduced Periscope Producer, which is designed for broadcasters.

Periscope Producer is a way for brands, media organizations, and other live video creators to broadcast high quality streams from devices beyond a phone or tablet.

Periscope Producer has been used by news organizations to extend the reach of their network broadcasts and added timely, relevant content to breaking news events and the conversation that surrounds them.

Additionally, media organizations have streamed award shows, conferences and other noteworthy events with Producer. Previously, experiencing events like these required a physical presence or more traditional way to tune in. With Producer, broadcasters can bring these events to Periscope, allowing their audience to watch them together.

Broadcasters who are interested in creating live video with Periscope Producer can apply for access at t.co/periscopeproducer. Periscope Producer is only available on iOS at this time. Part of the application asks what kind of software or hardware encoder you are planning on using (such as OBS, Teradek, Wirecast, or others). 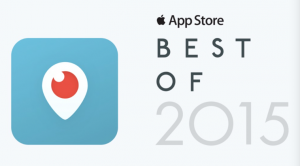 Periscope has added landscape! When they first launched, the Periscope app only supported portrait broadcasting. There isn’t anything inherently wrong with having to broadcast in portrait, but it can be limiting.

Landscape has now been added in response to many people’s requests for it. Periscope held off on adding landscape until they could “ensure a seamless experience across all of our platforms (iOS, Android, and Web).”

Shawn and I have made a couple of attempts to use Periscope as a way to do a live broadcast while we recorded our podcast. We found impossible to fit both of us on camera and on screen while using Periscope in portrait mode.

While some of this problem could have something to do with the layout of our studio, it was obvious that having access to a landscape option would have made things easier. It will be interesting to see how things work out next time we attempt to use Periscope to broadcast a live show (and use the newly added landscape instead of portrait).

Periscope has also made changes that improve accessibility for visually impaired Periscopers. There isn’t a lot of details about what they have specifically done, other than that the newest version of Periscope will support iOS accessibility features.