RØDE has a contest called My RØDE Cast. Got an idea for a podcast? Submit a mini-episode to My RØDE Cast for a chance to win 1 of more than 100 podcasting prize packs. They are looking for “tiny podcasts with big ideas”. Entries close 10am (AEST) Wednesday 23rd of June, 2021.

RØDE provided some information about what they are looking for in a mini podcast:

We’re looking for tiny podcasts with big ideas! Two minutes isn’t long, so make something that will hit us between the ears from the start. Your entry can be on any topic and in any style, as long as it is original and meets our submission guidelines. It can be a condensed version of an existing podcast, a teaser for a longer episode, or a snappy show.

Register for the competition or log in to access your starter pack. This includes all the details of the competition, and tips and ideas to get you inspired and more.

RØDE Microphones proudly announced the winners of their second annual podcasting competition, My RØDE Cast. These incredible podcasters will be taking home a share of $150,000 in prizes.

Launched in May, My RØDE Cast invited the world’s podcasters to submit a 1-2 minute episode showcasing their talents. The entries quickly surpassed last year’s total, with over 2000 podcasts being submitted from more than 60 countries worldwide.

The winners were chosen by three brilliant judges from the podcasting industry, Hrishikesh Hirway, Creator and Host of Song Exploder, Jacob Salamon, Co-Founder of WISECRACK, and Leah Harris, Australia’s Podcast Producer at Spotify.

“The show’s concept is great,” says My RØDE Cast Judge Hrishikesh Hirway. “To be mixed means to be caught between worlds, and that provides a very specific perspective from which to examine the topic of race. Plus, the hosts have great voices and delivery, and the editing is sophisticated.

Lidia’s Booktastic Podcast is a podcast from a young girl that tells other kids about the books she reads and what she likes about them (with a little help from her dad).

“Love the host choice and the interaction between daughter and dad,” says My RØDE Cast judge Leah Harris. “It would have a number of audience entry points for both kids and their parents. Warm and engaging, great use of guests.

Contemporary Issues is a podcast that tells the story of what appeared to be a typical day at work revealing itself to go beyond medical knowledge, enlightening the true meaning of care.

“The team and I are thrilled and honored to win this year’s My RØDE Cast competition!” says Major Prize winner CA Davis. “When my lead producer, Lex Ward, and I began formulating the show, I had no idea how to bring together creative sound design with a show that uses critical mixed race theory and analysis to unpack contemporary mixed race experiences. With RØDE’s help, we can continue to produce high-quality content that is detailed, engaging and takes our listeners on an educational and stereophonic journey. What a true, true honor.”

This year, we also opened My RØDE Cast to entries from China. The winners were chosen by a separate panel of judges, including Zhang Dong, Vice Director of the Sound of Music program on China National Radio and Chief Content Officer of Yunting; Yin Qiming, multiple National News Award winner, Vice President and Chief Editor of Himalaya FM (China’s biggest audio sharing platform) and Vice President of Copyright Society of China; and celebrated writer, director and actor Zhou Jianlong. The winning entries were City Guide Podcast, Nonsense, and Life Guide. 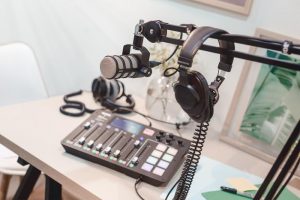 Australian pro audio powerhouse RØDE Microphones has announced that it will be donating $2 million worth of podcasting equipment to help New South Wales (NSW) schools impacted by COVID-19.

As teachers face the difficult task of overcoming disruptions to classes in the coming months, RØDE Founder and Chairman Peter Freedman AM has established a program that will give schools access to audio equipment they can use to deliver classes remotely via universally accepted podcast platforms.

From March 13, any NSW public high schools who want to take part and who have the capability to benefit from this initiative will be able to access an online portal on the RØDE website where they can order a complete podcasting kit, which includes RØDECaster Pro Podcast Production Studio, microphones and accessories. This will give them the opportunity to record course material remotely, in the event that their school is closed, and students are quarantined for an extended period of time.

“At the moment, Australia is scrambling to cope with the impact of COVID-19 across every aspect of day-to-day life,” says Peter Freedman AM. “We know that schools are already feeling that impact. These closures could be devastating for students, particularly those in Year 12 taking their HSC exams later in the year, and we are offering a practical solution to help teachers minimize disruptions to classes.”

He continues: “Podcasting is the number one media format being consumed by school students right now. It’s also an incredibly powerful teaching tool, and amidst the current crisis it’s really an ideal platform to give students easy access to class material that they can engage with, in a way that is simple for teachers to create, even if they aren’t audio experts.”

Schools that take advantage of the program will be able to keep their equipment, providing them with a valuable educational tool they can continue to use in the classroom once the COVID-19 threat has passed.

RØDE Microphones offered an accessory pack with every qualifying purchase of a RØDECaster Pro between November 1, 2019, and February 29, 2020. That promotion is now finished. RØDE will continue to accept valid claims until March 31, 2020.

To obtain your RØDECaster Pro, fill in the details, and pay the USD$20 shipping and handling fee, and RØDE will send you your accessory pack. Eligible customers can make their claim by clicking a button on the RØDE website.

To be clear, the RØDECaster Pro Accessory Pack is valid only for purchases of the RØDECaster Pro between November 2, 2019, to February 29, 2020. The purchase must have been from a participating RØDE dealer. The last day of making a claim is March 31, 2020.

The offer is conditional upon retaining your purchase receipt as proof of purchase of the product or products, and the date indicated on your receipt will be the date of purchase for the purposes of the offer.